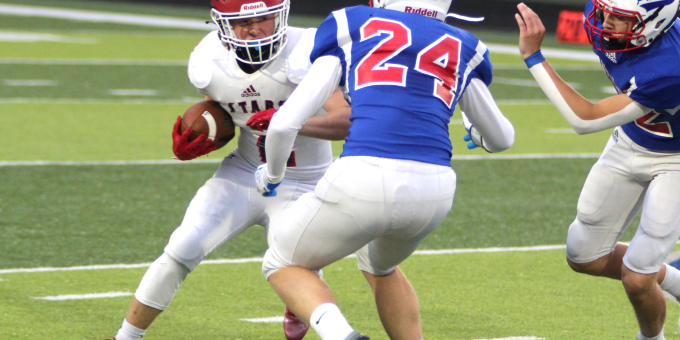 The Stars, winless at home this year and only 4-13 there over the last four seasons, have destiny in their hands as they chase a share of the Hoosier Hills Conference title. With two league games remaining, both at home, BNL should be in great position. Perhaps the games can be shifted to the road venues, because the Stars are undefeated away from home. That’s not going to happen.

BNL will host Floyd Central in a crucial HHC battle on Friday night. The Stars (3-3 overall, 3-1 in the league) share the conference lead with Seymour and Columbus East as they seek their first championship since 2006. If the home fires burn a little hotter, BNL Stadium could be the house of dragons and royalty rather than an abandoned ruin of the winless.

Why has BNL struggled at home? Good question. The crowds are huge and supportive, the student section is boisterous, the band is loud and sharp, so the atmosphere isn’t the issue. The competition has been tough (Martinsville, Bloomington North and Seymour are a combined 12-6) this season, but that doesn’t fully explain why the Stars have been outscored 90-34 on their turf.

“It seems like we’ve played some really good teams at home, but we haven’t played up to our level,” BNL coach Derrick Barker said. “Maybe we’re in a better routine if we’re on the bus, focused on the game, not having some of the distractions of playing at home. We’ll do some things different and maybe fix that.”

Conquering the Highlanders (3-3, 2-1) would end that trend and change the narrative.

Floyd’s 14-12 win over Columbus East (its first since 2003) last week is the reason BNL is back in the HHC discussion. Thank the Highlanders later for that favor, because they’ve have also been a BNL nemesis with four straight wins in the series. The latest, a 24-13 decision last year at Floyd, was demeaning and depressing as Floyd outmuscled BNL with sheer physical dominance.

The Highlanders pounded out 21 first downs, owned a 2-to-1 advantage in time of possession. The last score was the best and worst, a 14-play drive – all on the ground. The Stars were limited to 73 rushing yards and their only touchdown was a 71-yard interception return by Jesse Brock.

“They’re still that type of team,” Barker said. “They’re big up front, they have hard runners, and the quarterback (Tristan Robertson) is back. They have the ability to throw the ball, but they physically beat us up. I expect the same type of game plan.”

BNL has yet to concretely establish its offensive identity. Last week at Jennings, the Stars didn’t sparkle, even though they totaled 430 yards during the 21-7 triumph. Every win has had a different script (the comeback at Jeffersonville, the Cal Gates explosion at New Albany), and the defense was the story against the Panthers.

“I liked the physicality the defense played with,” Barker said. “The offense was kind of disappointing to look at all the yards we had and only 21 points, but we did a good job in moving the ball, controlling the clock, getting first downs. We need to finish in the red zone, that’s where it really matters. That’s what you need to do to win big games.”

And no game this season has been bigger than this one. Seymour will be hosting Jennings County to maintain its share of the lead, but nothing else matters if BNL can’t protect its home.

“In a game like this, there’s no reason to not have energy,” Barker said. “Let’s bring it. If we don’t win this one, it doesn’t matter as much. We have to take care of business. This is where you want to be, why you play, to be in big games like this.”

Last meeting: Last year at Floyd, the Highlanders beat down the Stars 24-13. Floyd recorded 21 first downs and a 2–to-1 advantage in time of possession. Tristan Robertson was 12 of 18 passing for 164 yards. BNL’s lone touchdown was a 71-yard interception return by Jesse Brock.

Game notes: Floyd has won four straight in the series. BNL is winless at home this year and only 4-13 there over the last four seasons.