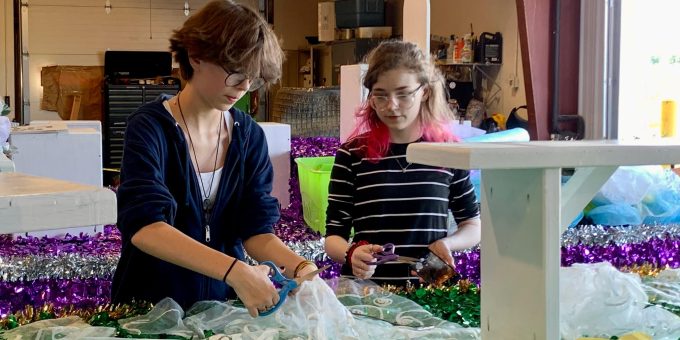 MITCHELL – Lessons in community service don’t typically include a rainbow assortment of petal paper, glue sticks, wire, foam board, sheer fabrics, and glitter – unless you’re in Mitchell and it’s September.

For the past decade, the Mitchell High School Art Club has pulled together a fanciful assortment of designs to create magical floats for the annual Persimmon Festival Parade. They easily look like the work of professional float creators as the floats roll through the downtown streets of Mitchell carrying beautiful queens, award winners, and the parade grand marshal. But, in fact, each float was designed and created by talented teenagers, with the assistance of dedicated adults.

Becky Mason, who serves as the art teacher at MHS and leads the art club, accepted the task of creating the floats in 2012 after the Greater Mitchell Chamber of Commerce, which sponsors the annual Persimmon Festival, could no longer order floats from the professional firm that had previously made the floats for the parade. Mason and her students took on the task with zeal. The chamber then donates money back to the art club as a way of paying for the floats. It’s a win-win situation. The art club has much-need funding for its student-led endeavors, and in return, the chamber has beautifully designed floats built right here in Mitchell.

“I can’t thank the chamber enough for trusting me and my students to come up with the designs and trusting us to build floats for such a wonderful event,” Mason said. “Everything we do here is for our kids and our community.

“The kids all have a say in the designs and any changes to the designs. They send me the designs, then we make it work, and they always do such a phenomenal job. They’re learning first-hand the importance of community service and what it takes to put on the Persimmon Festival each year.”

Mitchell Rainey is an adult now, but he started working on the parade floats in 2013 when he was a freshman at Mitchell High School. He’s one of the many adults who work side by side with the students to bring their designs to life.

“It’s cool to see them come in as hay wagons, and three weeks later, they look like this,” Rainey said as he glanced around the Mitchell Fire Station on Doc Hamilton Boulevard. Rainey also helps out the day of the parade at Lehigh Field, so he often doesn’t get to watch the parade as a spectator. “Then, at the end, after the parade is over, they leave again as hay wagons. It’s an amazing process.”

MHS junior Shaylin Thomas, who has worked alongside her best friends to create the floats this year, enjoys the time she spends with her peers, but she also loves seeing the finished product on parade day.

“It’s fun being able to help with something that is such a big deal for our community,” Thomas said. “I love seeing it in the parade and being able to say, ‘Hey, I was a part of that!’”

It’s a huge undertaking that involves a wide variety of volunteers. Charles Cessna is a volunteer who prefers to remain behind the scenes, but Mason knows she couldn’t do the floats without his guidance. The same goes for Danny and Ada Reynolds. Mason often calls upon Danny Reynolds to assist with any of her woodworking ideas. This year, for example, Danny is providing the wooden bodies of the dragonflies that will adorn one of the floats.

“Charles is my go-to guy,” Mason said. “I bring him the ideas, and he figures out how to make them stay in place. … Danny has made all the benches for the floats, and he cuts all the intricate pieces out of wood. He helps me with the structures. Each year, parents of the students come in to help. It’s a team effort that involves the help of so many dedicated volunteers, and I couldn’t do it without any of them.”

Madison Hensley and Hunter Strange, both sophomores, said they enjoy being a part of something so special to the Mitchell community.

“I just like being able to build the floats and know just how important they are to the festival,” Strange said.

“It feels like you’re doing something important,” Hensley added.

Most of the students this year like the designs of the queen floats, especially the fairy garden theme of the float that will carry the younger queens.

“It’s been pretty fun putting everything together,” said Vincent Petro, a junior who was encouraged to join the art club by Thomas. “It’s cool to see it all come together and know the effort that went into it.”

Alex Slaten, also a junior and a member of the art club who is friends with Petro and Thomas, said he enjoys the camaraderie of the project, but he also sees how important it is for the Persimmon Festival.

“It’s great to be a part of something for the whole community,” Slaten said. “Knowing people appreciate what we do means a lot.”

The money the art club earns from the float project has purchased pottery wheels for the art club, as well as what Mason calls “different and interesting supplies.” The money goes toward funding the annual Theresa Staley Scholarship as well. Staley was Mason’s high school art teacher and the reason she chose to go to college to teach art. The money is also used to help those in need in the community and take art students on field trips.

“Most importantly, it teaches the students the importance of volunteerism and how to support their community,” Mason said. “It’s a wonderful project that serves multiple purposes.”

The parade steps off from Lehigh Field beginning at 2 p.m. Saturday, Sept. 24. It winds west on Main Street, travels north on Seventh Street, then turns west on Warren Street, before turning north on Eighth Street. It will end at Bishop Boulevard, named for the festival’s founder, George Bishop. For more information on the festival, including a schedule of events, visit http://www.persimmonfestival.org.