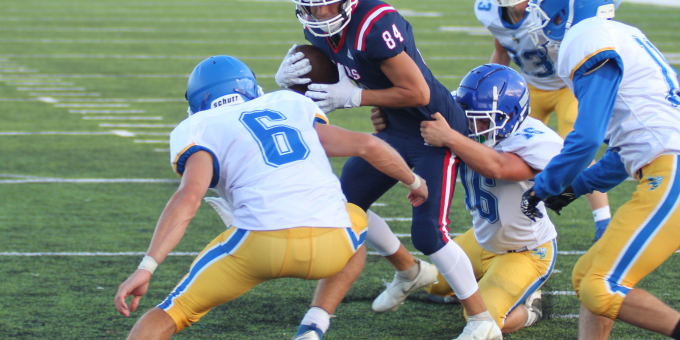 BEDFORD – Of all the constellations hovering in the night sky, Ursa Major is the most famous, the “great bear” that features the instantly recognizable “Big Dipper.” Doesn’t require a Hubble telescope to find it. Just look up. Mitchell got a great view of perfectly-aligned Stars, a zodiac of football brilliance, on Friday night.

Bedford North Lawrence was the bear, growling and clawing, during the IHSAA-sanctioned scrimmage with its county rival. Dominant and unstoppable, these Stars sparkled in every phase. DIdn’t need binoculars to see that.

With junior quarterback Memphis Louden directing a flashy offense, with a defense that forced two turnovers and didn’t allow a score until Mitchell’s final three plays, BNL was a Van Gogh painting, a masterpiece that left the Bluejackets a little star-struck. While the performance must be tempered with the reality of its preseason setting, it set a tone for the future.

Louden threw for 166 yards and three touchdowns, and also ran for three more, as BNL scored eight times in the three offensive series (37 total plays) from various points on the turf. Yet the defense was probably more impressive, allowing only one pass completion. How that translates to next week, when the regular season begins, remains to be proven. But there’s no doubt of the positive vibes and powerful message.

“For this time of year, it was the best we’ve looked in a scrimmage,” BNL coach Derrick Barker said. ”I was very pleased with the intensity we played with, the effort and the execution.

“It’s a good stepping stone. I’m sure there will be things to clean up, but it was definitely a lot better than it could have been. It was important to get that confidence built, showing we can be a good football team. Now the ultimate measure of success is consistency.”

BNL’s highlights were like the stars in the sky, abundant and quite attractive. They started from the opening series, when the Stars marched 65 yards in 11 plays, continued during the goal-line scenarios (with four scores in 10 plays) and concluded with three touchdowns during the 12-play segment from the 35. Louden hit Colten Leach for 23 yards to ignite the opening drive, then later punched in from a yard out to start the blowout.

“The biggest thing was that first series, putting an actual drive together,” Barker said. “We put a solid drive together. We want to be explosive and make big plays, but at the end of the day you have to rely on staying in front of the chains. Memphis did a great job of being the point man and distributing the ball.

“I was afraid we’d come out slow, waste a few plays with mental errors, testing the water. But we jumped right in. It was awesome, it was a fun time. I’m proud of them.”

The goal-line series included scores by sophomore running back Zach Brosamle, Kole Bailey, Louden and Trace Bunge. The final series featured a 12-yard strike from Louden to Bailey (who broke through three tacklers to reach the end zone), a 16-yard option scramble by Louden, and a sharp 14-yarder from Louden to Brayden Baker.

Yet the defense, if it’s possible, was better. Mitchell’s 37 plays totaled only 80 yards, with interceptions by freshman Gibson Crane and senior Colton Staggs, with the Bluejackets finally scoring on their 35th play (Carsyn Herald from a yard out). Barker’s focus was on the defense, and the image was crystal clear and fabulous.

“That’s what I wanted to see,” Barker said. “I knew they would be physical, up front on the line, so I wanted to see how we handled that. They did a really good job. I would have liked to have kept the shutout, but that’s just me being greedy.”

“We did what we needed to do,” BNL senior linebacker Collin Whittaker said. “We definitely wanted to show what we can do. The d-line was phenomenal, stopping the run, and the linebackers filled in perfectly. We just need to carry on that energy.”

The Crane pick was the best play of the night. Senior linebacker Tyson Patterson swooped in on Mitchell quarterback Kale England and hit him before England could unload the pass. The ball popped high in the air, and Crane made a diving catch in the backfield.

“That was an incredible play,” Barker said. “Tyson getting the strip-sack and Gibson continuing the play to make an incredible catch. That’s a big play in an actual game, such a momentum changer.”

Mitchell had some moments. Herald ran for 37 yards and the touchdown, Blake Williams and Ethan Turner had 10-yard runs. New head coach Kevin Kling pointed to the running game as a positive.

“I liked a lot of what we did,” Kling said. “We came out and competed, we worked hard. We won’t see a team this athletic on our schedule all year, so coming in with a new system, with a group of kids that’s trying to learn, and play against a team with a foundation coming back and knows what they’re doing, we saw a lot of good stuff.

“We have a lot to clean up, don’t get me wrong, but we’ll get that taken care of. That’s part of what a scrimmage is. When we get more comfortable, you’ll see a different ballclub.”

In addition to the Louden numbers, Dylan Nikirk caught six passes for 53 yards, Ryker Hughes snagged three for 46, while Bailey had the two touchdown receptions.

Both teams will now shift toward the season opener. Mitchell, still waiting on the completion of its new turf field, will visit Edgewood on Aug. 19, while the Stars will host Martinsville.