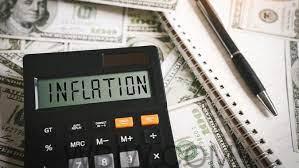 INDIANA – New data released Wednesday showed the annual consumer inflation dipped to 8.5% in July after hitting a 40-year high of 9.1% in June, as falling gas prices finally gave consumers a break at the pump.

Inflation has been rising rapidly since the middle of 2020 but has seen a couple of quick dips during that period, notably from July to August in 2021 and from March to April of this year.

The United States is still a long way from the Federal Reserve’s goal of 2 percent annual inflation over time, and the bad news is that high prices for many goods and services are likely here to stay for a while.

The latest numbers from the Department of Labor show that the index for energy in July was up 32.9% annually, falling from 41.6% in June. The food index was up 10.9% annually, rising from 10.4% in June.

July core inflation, which is all goods minus the particularly volatile categories of food and energy, stayed at 5.9%.

The Fed is taking aggressive steps to get inflation under control, but that doesn’t mean that prices overall are going to rapidly decline or return to pre-pandemic levels. It just means that prices as a whole will level off and increase more slowly, rather than continuing to skyrocket.

Fed officials target a low inflation rate partly because the central bank is wary of deflation — falling price levels — which can hurt economic growth. If prices are declining overall, consumers could pull back on spending money because they expect costs will be even lower in the future. Decreased spending could lead to a slowdown in hiring and business investment, meaning that more workers could be laid off and wage gains could slow. If Americans can instead expect prices to rise at a stable rate of around 2 percent, they can better plan ahead and make more sound decisions about their finances.

But just because prices as a whole will continue to rise doesn’t mean that everything will be this expensive forever. Prices for many goods increased sharply during the pandemic as demand for goods soared, and economists say that certain categories could eventually see some price declines.

Americans have already seen some of those price declines happen. Gas prices fell 7.7 percent from the month before, according to the Consumer Price Index report released on Wednesday. After peaking at above $5 a gallon in June, gas prices have been falling steadily for weeks, although they still remain nearly $1 higher than they were a year ago.

Retail gas could conceivably continue to fall in the future, possibly below $3 a gallon, because fuel prices tend to be more volatile. Used car and furniture prices, which both spiked during the pandemic, could also become cheaper as supply chains untangle and demand fades.

Things like rent, meals at restaurants, and medical care will likely continue to get costlier, albeit, at a more moderate pace, economists say.

Average wages are rising and outpacing the rate of inflation, which means that many Americans could afford to buy more even if prices are increasing. Right now, that isn’t happening. Average hourly earnings have picked up by 5.2 percent over the past year as workers have remained in high demand and businesses have struggled to fill open positions during the pandemic.

It’s unlikely for many services to see significant price declines, mostly because businesses are paying more for labor now and workers usually don’t experience pay cuts. As labor costs increase, it becomes more expensive for businesses to operate, leading to firms passing on some of those cost increases to consumers.

Rent is also unlikely to get cheaper. Although rent prices will probably grow at a slower rate than they are now in the coming months and years, they don’t typically see outright price declines outside of a severe economic downturn. In July, rent prices continued to climb, rising 0.7 percent from June.

To get inflation under control, the Fed has been raising interest rates since March to cool consumer demand. As borrowing money gets more expensive, the idea is that consumers will start to buy fewer goods and services, eventually leading to a drop in prices. But if consumers are spending less, businesses could pull back on hiring, likely resulting in lower demand for workers and slower wage growth, said Sarah House, a senior economist at Wells Fargo.

That might be little comfort for Americans who are finding it difficult now to afford basic essentials, such as gas, rent, and groceries.