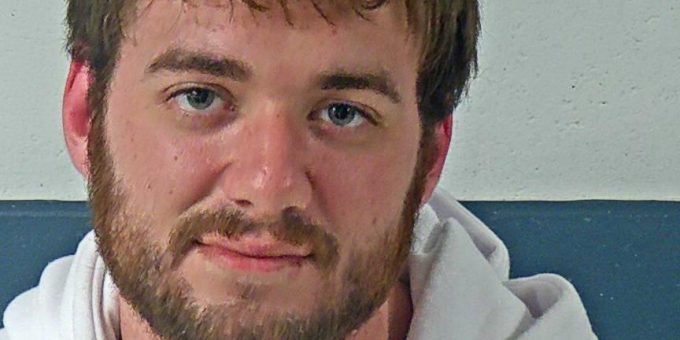 BEDFORD – A Bedford man was arrested Tuesday, August 2 after a report of an erratic driver in a black car with the windshield busted out traveling north on State Road 37 from the overpass.

Police say they had received several calls about the driver of this vehicle over the last couple of days regarding road rage incidents.

On Monday, August 1, 2022, police received a report of 24-year-old Austin Hinton busting out the windows of a vehicle on Ted Jones Drive.

An officer found the vehicle on August 2 in the area of 16th and L streets. The driver of the vehicle made two sudden jerks with the vehicle while traveling east on 16th Street.

The officer then learned that Hinton was wanted on a warrant following the damage he allegedly caused on August 1.

A Bedford Police officer attempted to stop Hinton while traveling west on 16th Street at E Street. Hinton refused to stop and increased his speed. At the intersection of 16th and H streets, Hinton began passing vehicles improperly on the left side, before he stopped in the middle of the road.

The officer told Hinton to pull over and he became hostile with the officer when confronted about his driving behavior.

Hinton was asked to step out of the vehicle. He continued to be hostile to officers drawing the attention of several bystanders in the area and other drivers in the area.

Hinton was then handcuffed and while being escorted to a police vehicle, he began resisting and yelling.

At this time, officers had to forcibly detain Hinton against the police vehicle. Due to the level of Hinton’s resistance, a large size dent was left in the rear driver-side passenger door. Sipes Body Shop estimated the damages at $1,031.68.

During the struggle, an officer suffered a cut on his left hand.

While being transported to the Bedford Police Department, Hinton continued to be hostile and slammed his head on the transport cage.