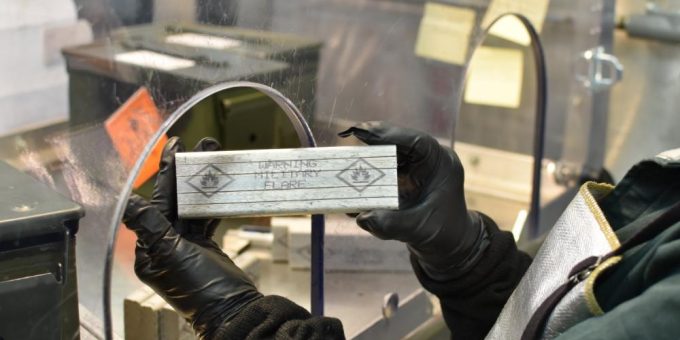 CRANE – Crane Army Ammunition Activity in a joint effort with the U.S. Air Force is integrating a customized printing system into its countermeasures decoy flare program. The new technology allows printing to be done on live energetics which is increasing safety while ensuring that CAAA remains a key supplier for the U.S. military in its efforts to support the warfighter.

The Keyence MK-G 1000 is the world’s first self-troubleshooting continuous inkjet printer that does not require operator involvement, enabling CAAA to safely apply warning labels directly onto energetic grains, and better meet new requirements from the Air Force. This new technology allows for improved safety not only in the flare production process but also achieves the Air Force’s priority of safety in the rare event an ejected flare is found on the ground.

CAAA’s Countermeasures Commodity Manager Trish Staggs said, “Safety is crucial. If an unexploded munition is found, people will see the warning and know not to touch it.”

CAAA is the first installation within the U.S. Army’s Organic Industrial Base to implement the new technology on a pyrotechnic flare line. The capability to print at a high rate of speed from any direction or orientation using a four-head printing system is just one of the many qualities of the non-contact system. Damage and blurring on the bare energetic material are eliminated by spraying closely controlled dye-based, fast-drying ink particles onto targets.

With the utilization of the printer, operators are able to focus on other areas of the mission. The MK-G 1000 has the world’s first self-diagnostic technology that can automatically perform maintenance and troubleshooting, which are key assets of the machine. If any issue arises, the printer attempts to repair itself which eliminates the need for a trained technician. It features a hands-free self-cleaning function which not only cleans the ink path, but also the components to help maintain the print quality. Both the printing and the cleaning processes have been adapted to meet explosives use standards.

A highlight of the system is the ease with which it functions. By eliminating specialized training, any operator can handle the job. With the non-contact capability, the printer is safer and more efficient to operate.

“It is so easy to use and is very operator friendly,” said Tina Burden, a CAAA explosives operator. “We don’t even have to touch it; it does the work for us and eliminates the need for us to handle the grain as much during production.”

The printing system was integrated into the production line safely and easily after CAAA technicians, and an Indiana-based industry expert conducted approximately 70 hours of research. The building’s production schedule was never impacted throughout the set-up process.

“There was no learning curve,” CAAA Production Controller Devon Roach said. “Set-up, testing, and the go-ahead to use live energetics were done effortlessly and they have never looked back.”

“I can’t emphasize enough how willing to help the Keyence company and the customer service representative have been,” Dave Bowman, a CAAA explosives operator supervisor, said. “Any problem or question has been taken care of in a quick and uncomplicated manner.”

The U.S. Army is currently bringing its OIB into the 21st century by modernizing its facilities and processes. Integrating the printer into munitions production is an example of how CAAA is infusing the industry’s best practices while maximizing the skills and capabilities of its civilian workforce.

Crane Army Ammunition Activity produces and provides conventional munitions in support of U.S. Army and Joint Force readiness. It is part of the Joint Munitions Command and the U.S. Army Materiel Command, which include arsenals, depots, activities, and ammunition plants. Established Oct. 1977, it is located on Naval Support Activity Crane.