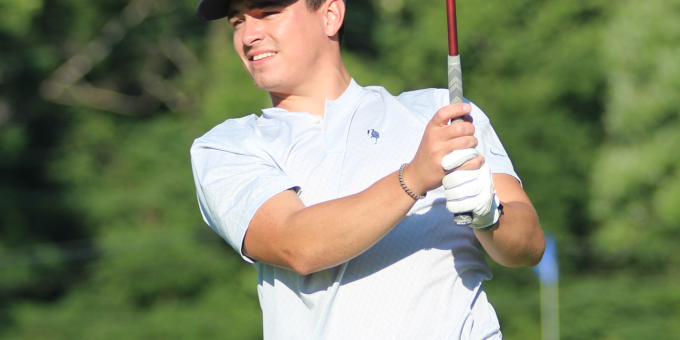 BEDFORD – With one blazing birdie streak, Trey Turner made his move. The third round of a 72-hole tournament is commonly known as “moving day,” and Turner has the Uhaul truck ready to tote home the hardware.

Turner, the defending champion, posted three straight birdies in the “Scoring Zone” of Otis Park, firing a 3-under 34 on the front nine and avoiding any major mistakes on the back to card a sizzling 69 during Saturday’s third round of the Bedford Men’s City Tournament. He will lug a six-shot lead into Sunday’s final round as he chases his third championship.

The birdies of separation came on holes 5-7, where red numbers are expected. Back-to-back par-5s, followed by a short and defenseless par-4, yield a lot of birdies, and Turner conquered them all during his run to a comfortable working margin. He completed 54 holes at 2-under 214, a sweet half-dozen ahead of challenger Koby Robb.

After his only real glitch – a misclub off the tee on the third hole that sent the shot sailing over the green – Turner avoided potential disaster and then caught fire. After that birdie firestorm, he made four straight pars before a three-putt bogey on 12, but he recovered that shot with a birdie on the downhill 16th and coasted to the clubhouse with another title within reach.

“It’s a confidence boost, after a five-day layoff, to come back and hit it as good as I did last Sunday,” Turner said. “I could pick my way around the course and put the ball where I wanted it to be. It’s nice to know I can hit it where I want to hit it right now.

“It helps having two par-5s on the front, both pretty reachable. If you put a drive in the fairway, you’ve got a good look at birdie. Those two holes can really kick-start a round, and I parlayed that into a birdie on 7. That was nice to have that stretch and get some confidence going.”

Robb, who started the day two strokes off the midpoint pace, opened with a wedge to 3 feet for birdie on the first hole. He added another birdie on 5, but couldn’t get anything else to drop. He bogeyed 9, 13 and 14 to settle with a 1-over 73. Any other day, that would have been good enough to stay within contact of the leader.

“I’m hitting the driver and irons so good,” Robb said. “But I didn’t take advantage of the opportunities. I have to find a way to convert those chances. I could have shot something lower, so that’s a positive I will take into tomorrow.“

The other contenders have a lot of ground to cover. Jansen Perdue fired a solid 73 to finish at 221, seven back, while Sam Cobb (74) and Daylen Tidd (73) are lurking at 223. They will have to shift into overdrive, or hope Turner stumbles and tumbles. Robb, who cracked his driver during the third round, will be in the best position to get aggressive. “And it’ll be some of the more aggressive 3-woods you’ve ever seen,” Robb said.

Turner will not alter his strategy. He didn’t get to this point by backing off, nor by playing a dumb game.

“I’m happy with the way I played. I didn’t make a ton of mistakes,” Turner said. “I don’t want to get conservative. I want to play my game. If I need to make adjustments in the round, that will happen. I’ll just try to get in a rhythm, get comfortable swinging the club, and see how it goes from there.”