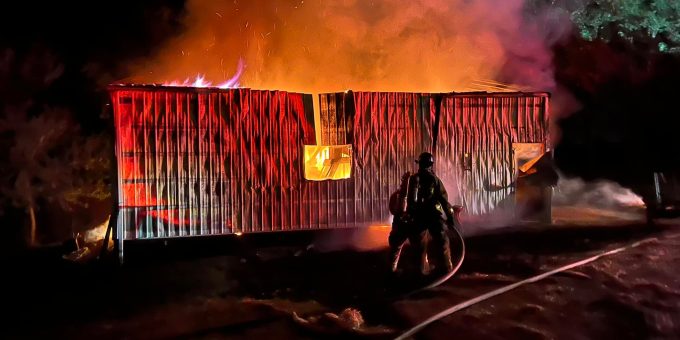 Due to the already extensive fire growth and damage to the building firefighters made a defensive attack on the fire from the outside.

Once the main body of fire was extinguished crews spent a few hours pulling sheet metal and other debris out of the structure exposing other hidden pockets of fire.

The garage and contents inside are a total loss, and the cause of the fire is still under investigation.

Around 4:30 a.m. as fire units cleared the structure fire they were dispatched to a vehicle fire at Woodland Springs Apartments.

Firefighters arrived to find a minivan fully engulfed with smoke and flames.

The car owner actually got in the van while it was still on fire to move it out of the parking spot away from other vehicles and the building. They then went to retrieve a fire extinguisher and when they returned the car was completely consumed by fire.

Firefighters arrived on the scene and were able to quickly extinguish the fire.

The cause of the fire is still under investigation.