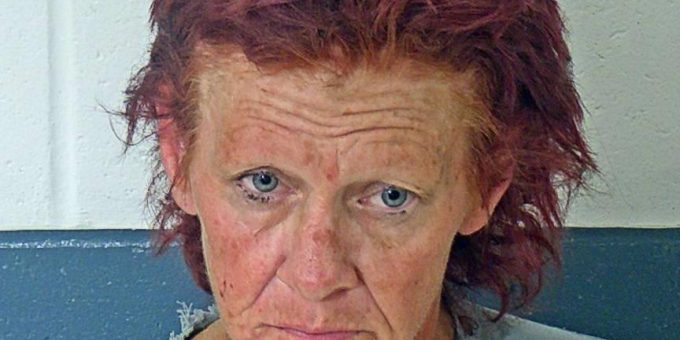 BEDFORD – A Bedford woman was arrested on Sunday after the Lawrence County Sheriff’s Department received a call to be on the lookout for a black Chevy TrailBlazer with a temporary tag.

The caller reported the female driver appeared to be falling asleep at the wheel and was unable to maintain her lane of travel.

A deputy intercepted the vehicle at Salt Creek Bridge. The officer said the driver was driving slower than the 55 miles per hour. The officer stopped the driver, 51-year-old Christina Stiles near the intersection of 16th Street and State Road 37.

Stiles was asked to step out of the vehicle. When she stepped out a glass pipe fell from the vehicle onto the ground.

Stiles told police she found the pipe under the seat of the car. She told the officer she put the glass pipe between her legs and was going to get rid of the glass pipe as soon as she could.

During a search of the vehicle, police found a multi-colored handbag containing marijuana, 10 Clonazepam pills, and a pink plastic grinder that contained marijuana.

Located on the floorboard on the rear driver’s side, officers found a silver box. Inside this box was located four clear plastic bags. Two contained crystal meth. Also inside this box was another small black box containing a small amount of crystal meth. In the box, officers found two straws, rolling papers, a burnt piece of paper, and a thumb drive.

Stiles did perform a standardized field sobriety test which she passed. She admitted to knowing the drugs were in the vehicle and admitted to smoking meth four days ago.

She was transported to the Lawrence County Jail on charges of possession of meth, marijuana, and a controlled substance and possession of drug paraphernalia.