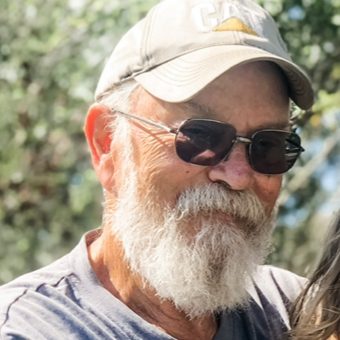 Jim served his country for six years in the U.S. Navy and retired from NSWC Crane. Jim grew up farming alongside his father from a young age and continued his love of growing things by tending a large garden every year and canning and preserving food for his children, grandchildren, and several fortunate neighbors. It was a joy for him to pass on his love of gardening to all four of his children.

He was an avid fisherman and Dale Earnhardt fan, both of which he shared with his son. Jim was a Mayflower
descendant. He was a member of Popcorn Christian Church of Springville, IN.

He was preceded in death by his father, Bruce; his mother, Montine; his brother, Tom; and father-in-
law, Delbert Walls.

Funeral services for James Brewster Taber will be held at 12:30 p.m. on Saturday, June 18, 2022, at the Popcorn Christian Church in Springville, Indiana. Visitation will be from 11:00 a.m. until the service hour Saturday. Burial will be at 11:00 a.m. (CDT) on Monday, June 20, 2022, at the Pleasant Hill Cemetery in Kansas, Illinois with military honors being accorded.

Funeral arrangements have been entrusted to the Ferguson-Lee Chapel of Thorne-George Family
Funeral Homes in Bedford, Indiana.

Online memories and condolences may be shared at www.FergusonLee.com.