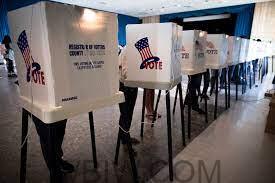 Election officials say the centers will save both time and money allowing residents to vote at any eight centers in the county. Officials say no resident would have to drive more than 8.5 miles to vote. Some of the possible locations being reviewed are Eastside Park, the Montgomery Ruritan Club, and the Conservation Club.

An example, if you work at Crane and live in Washington, it may be difficult to get back to your precinct before the polls close. Voting centers would allow someone who lives in Washington to vote in Odon.

If the resolution is approved by the County Commissioners, a committee will be formed to oversee the voting centers which would be open effective next year.

Officials say voting centers would allow the county to hire fewer poll workers cutting the number from 110 to around 50 saving the county roughly $6,000 per primary and general election.