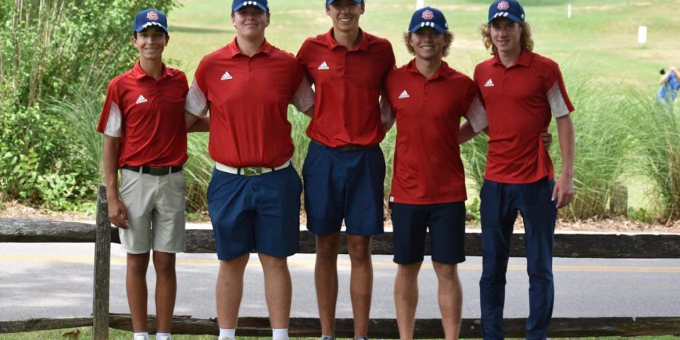 BLOOMINGTON – Bedford North Lawrence advanced to the second stage of the state tournament series, finishing second in the IHSAA sectional at Cascades on Monday.

The Stars carded a team total of 318. No.2 Bloomington South won the title with 293, while Bloomington North was third with 325. The top three teams in the 10-team field, plus the top three individuals who are not members of qualifying teams, advanced to the regional at Champions Pointe.

BNL’s Trevin Hutchinson, a state finalist last season, paced the Stars with a 4-over 75 (finishing fourth in the field), and Jett Jones battled past a brutal start to fire a 79.

“You survive and advance at this time of year,” BNL coach Jeff Hein said. “The course wasn’t playing very easy, the greens were really firm and slow, which is not a good combination. But we showed a lot of resilience after a couple of bad holes. We found a way.”

Hutchinson had two birdies on the front nine and posted an even-par 35 on that side. His only real glitches were two double-bogeys on the back (15 and 17), although he salvaged strokes with two more birdies. Jones opened with a triple-bogey 8 on the first hole, then settled into solid play with birdies on 13 and 14.

Houston Corbin had the shot of the day, holing a wedge shot from 90 yards for eagle on the par-4 seventh. He totaled 81 with a birdie on 13, while Tyler Bellush and Colton Staggs capped the team scoring with 83s.

South’s Happy Gilmore was the medalist with a 1-under 70 while teammate Jacob Paine posted 72.

“We thought if we got second, we’d have done well,” Hein said. “We were playing between us, North and Seymour for two spots. Scores weren’t very low. It was hard to hold the greens.”

BNL will now focus on the loaded regional, which will include South, No.6 Center Grove (the sectional champion at Franklin), No.7 Silver Creek (the winner at Providence) and No.16 Columbus North in the 18-team field. The Stars shot 310 on that course during the recent Providence Invitational.

“It’s a matter of shooting a good score. The kids like the course and feel like they can play well there. We just need to post a good number, do the best we can, and see if someone falters. The kids are confident, they know they can play there. We’re hoping to peak at the right time.”

Champions Pointe will host the regional on Thursday at 8 a.m. The top three teams, plus the top five individuals who are not members of qualifying teams, will advance to the state finals at Prairie View Golf Club on June 14-15.