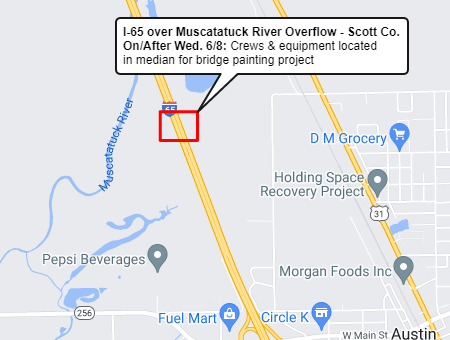 SCOTT CO. — Indiana Department of Transportation contractor Three Star Painting plans to begin work on or after Wednesday, June 8, to complete a bridge painting project on I-65 over Muscatatuck River Overflow in Scott County. The bridges are located approximately one mile north of S.R. 256 near Austin. Crews and equipment will be stationed in the median of I-65 for the next four-to-six weeks while work is in progress. Major impacts on traffic are not expected.

Later this summer bridge painting will take place at Moonglo Road (C.R. 100 N.) over I-65 and Honey Run in Scott County. The bridge is located north of S.R. 56 near Scottsburg and will involve overnight lane closures. The project also includes patching on the piers of the bridge. An official start date will be announced.

The contract was awarded in March of 2022 and has a completion date of October 31, 2022. INDOT reminds drivers to slow down, avoid distractions, and watch for crews and equipment in construction zones. All work is weather dependent and schedules are subject to change.

Painting is one of many preservation techniques utilized by INDOT to extend the life of bridge structures. Prior to painting, beams and other components are sandblasted to remove existing rust and the new coat of paint acts as a sealant to protect from water, salt, and other factors that may cause corrosion.