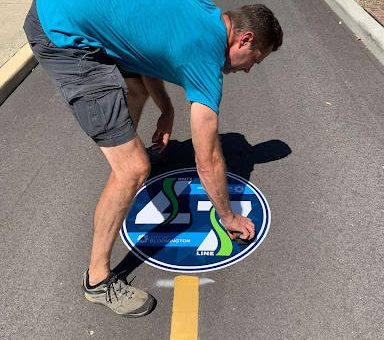 BLOOMINGTON – Numerous infrastructure improvement projects are underway this season to advance community goals, including safety, sustainability, accessibility, equity, economic vitality, and quality of life in Bloomington. The City will provide regular public updates on a range of these improvements as they progress.

On June 1st, Bloomington Parks and Recreation and Public Works created a cordoned-off detour, lined with orange barricades, through the southwest part of the parking lot south of City Hall. The detour area is for bicycle and pedestrian traffic only and bypasses the trail closure area to return trail users to the B-Line. This is a public safety precaution due to the need for repair of the 140-foot-tall Johnson Creamery smokestack, which was determined by inspection on December 14, 2021, to be potentially dangerous. The smokestack will not be lowered or removed until August at the earliest.

Safety bollards (posts that create a protective perimeter) will be installed on Morton and 8th Streets beginning June 6th. These separate Farmers’ Market customers from vehicle traffic. Installation at each entrance is scheduled to take up to four days to complete and the majority of the work is planned to be completed by June 10th.

Contractors are continuing construction of the wooden stairway southwest of the causeway that will lead to the loop trail, which is still under development.

The project at Lower Cascades, Bloomington’s first public park, is substantially complete. This includes a significant streambank erosion project and trail and boardwalk construction. The new accessible boardwalk to the waterfall opened for public use on May 11th and last week contractors restored most of the original limestone picnic tables to new concrete pads; the rest are in the process of being restored. Contractors will still be on-site tending to final tasks but park facilities are open to the public.

Parks and Recreation crews finished removing old engineered wood fiber from the playground Wednesday, June 1st, and contractor Forest Commodities is scheduled to be on-site June 2nd or 3rd with a giant machine that blows in new engineered wood fiber surfacing. The playground will remain closed until all the new surfacing is in place. It is expected to reopen on the 3rd or 4th.

Asphalt removal work in the area identified for the planned scatter garden (designated place for scattering the ashes of those who have been cremated) is complete. Crews are now grinding away old asphalt on the existing interior road sections slated for resurfacing. Weather permitting, they will begin laying asphalt this week. The cemetery remains closed to pedestrian and vehicle traffic while the work on the interior road work is completed.

The Bid for the construction of a sidewalk on North Dunn Street between 15th and 16th Streets was published on May 29th and the City aims to award this project on June 21st. Construction is expected to be completed before the end of August. Lane closure on Dunn St will be in place during this project, and coordination with other projects in the area was included in the planning process. This project was prioritized and funded by the City Council Sidewalk Committee. More information can be found on the City website at https://bton.in/Yjh1Z.

In a collaborative effort among Public Works, Planning and Transportation, and the Engineering Department, with funding and design from the Office of the Mayor, new decals were placed along the 7-Line to celebrate the new infrastructure. The City of Bloomington officially opened the 7-Line, a three-quarter mile long protected east-west bike lane designed to connect the B-Line, downtown, Indiana University campus, and eastside neighborhoods, in November 2021.

Construction on 17th Street between North Walnut and Grant Streets is ongoing and expected to be completed by August. To facilitate construction this summer, the westbound lane of 17th Street is closed to through traffic and a detour directs drivers to Dunn Street to the Bypass to College Avenue. This is part of a larger project that improves 17th Street; improvements include constructing a multiuse path along the north side of the street, constructing accessible sidewalk curb ramps, resurfacing the street, and replacing the existing traffic signal at the intersection of 17th Street at Madison Street/Kinser Pike. The improvements are part of the City’s commitment to sustainability, accessibility, and quality of life for all residents. The project is supported by federal funding as prioritized through the Bloomington Monroe County Metropolitan Planning Organization.

Learn more about the project at bloomington.in.gov/engineering/projects/17thpath.

The Indiana Department of Transportation (INDOT) has a project to improve pedestrian facilities, accessibility (all ramps will be updated to current ADA standards), and respond to reported crash history at the intersection of East 3rd Street (SR 46) and College Mall Road. Construction began in May and is expected to be completed by July 30th. Construction involves some temporary lane and sidewalk closures.

Headley Road remains one way going north between the IU Research and Teaching Preserve parking lot south of the Griffy Lake causeway to the first private residence north of Griffy Lake. Installation of the guardrails on both the east and west sides of the causeway is complete; crews await a window of good weather to paint and stripe the roadway prior to the road being reopened to two-way traffic.