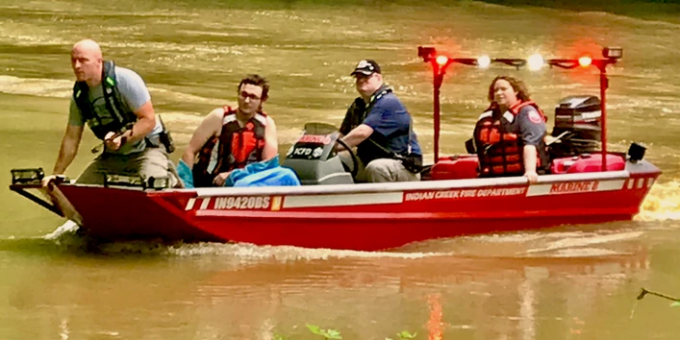 COXTON – Indian Creek Volunteer Fire Department rescued a jet skier from Salt Creek Saturday after he overturned in the water.

The man called 911 himself at 10:22 a.m. as he held on to the jet ski. He remained on the line with dispatch for nearly 40 minutes until emergency personnel from the VFD were able to locate him between Old State Road 450 and the Milwaukee Trail on Salt Creek.

Thanks to a coordinated effort between Lawrence County 911 dispatchers and emergency personnel who helped perform the rescue using a boat purchased for rescues similar to this, they were able to bring the man safely to shore.

The man was taken to a waiting IU Health Ambulance to be evaluated at the scene.

A Coxton Road resident allowed emergency personnel to use his private boat ramp in today’s rescue.