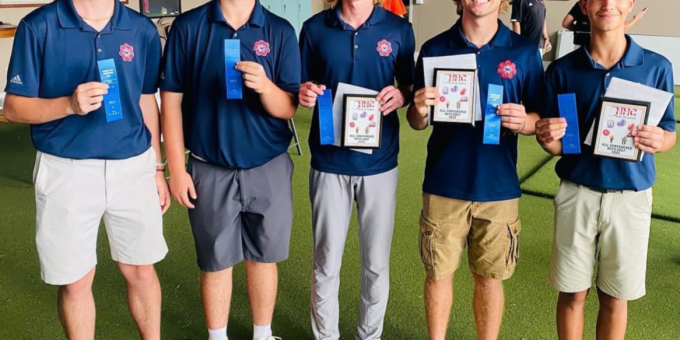 BEDFORD – Tyler Bellush had no choice. With that family name, and history, he was destined to play golf, following in the footsteps of his father, uncle and aunt at Bedford North Lawrence.

Now he’s made a name for himself, adding to the legacy.

BNL’s quiet freshman, slight in stature, came up big in game, firing a career-best 80 while propelling the Stars to the Hoosier Hills Conference championship on Saturday at storm-damaged Otis Park. BNL, despite troubles on the double tours of the front nine, fired a team total of 325 to win its second straight league title and the 21st in program history.

After the menacing Thursday thunderstorms caused massive flooding on the course and forced the indefinite closure of the back nine because of bridge washouts, the field had to play the front nine twice, with the par-5 fifth and sixth holes converted to par-4s for one of the rounds to adjust the course to the familiar par 72. That fit Bellush perfectly as he carded a birdie on the fourth hole (the first time through) and relied on his short game for the rest.

At 120 pounds, the kid doesn’t yet have the power to punish a course. But he’s got course intelligence, and the pedigree, to compensate.

“A lot of up-and-downs and putting,” Bellush said of his current skill set. “I was hitting everything pretty well, and I was making putts.”

Bellush was one of three Stars to earn all-HHC honors. Trevin Hutchinson, even with two wayward shots off the property on that infamous eighth hole, carded an 81, as did Colton Staggs. Those scores seem high to claim a spot among the top five in the event, but that’s why the winner is crowned when the numbers are tallied. BNL conquered runner-up Floyd Central by seven strokes.

“It wasn’t pretty,” BNL coach Jeff Hein said. “We threw strokes away, but we still won. We still have things to learn, but it’s a lot more fun to talk about a win, even if we didn’t play our best. You never know.

“Our bottom three guys carried us and really played well. Tyler had the best round he’s ever shot, and he shot it at the right time. That 80 was huge. Colton found a way to grind it out. Our top two didn’t have their best stuff, but that’s why it’s a team game. Other guys have to step up and play well.”

Jett Jones, who also struggled with accuracy, and Dylan Endris capped the team scoring with 83s. Hutchinson started afire, going 2-under through his first four holes. Then he went 8-over the next five. But he had a birdie on the seventh during the second swing. Staggs had back-to-back birdies on 6-7 during his second loop.

“It was a big advantage to be at home,” Hein said. “Everyone got thrown for a loop when we had to play the front twice. I thought it would be a bigger advantage to play the back because there are holes back there that require course knowledge, while the front is more open. But it worked out.”

New Albany’s Blaine Hamilton was the medalist with a solid 75 that included birdies on 2 and 9 the first time through, on 6 during the second.

“It was definitely new to all of us, but I think we adapted pretty well,” Bellush said of the repeat trips on the front. “I’m more used to the front because I play it more, and I really like the way the holes are laid out

“I thought there would be better scores. We were all really surprised we won, because we didn’t play that great. We were just happy in the end.”

BNL will return to action on Tuesday, visiting Seymour to face the Owls and Providence.