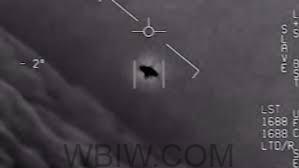 Tuesday’s hearing of the House Intelligence Counterterrorism, Counterintelligence, and Counterproliferation Subcommittee followed on the heels of a preliminary report submitted last year to Congress by the Office of the Director of National Intelligence that outlined progress to date on the Unidentified Aerial Phenomena Task Force.

Then Future President Gerald Ford was the top Republican in the House when he forwarded tips about UFO sightings to the Air Force in 1966.

The Air Force sent an astrophysicist, J. Allen Hynek from Northwestern University, to Michigan to investigate.

“Swamp gas” was Hynek’s “flippant” explanation, according to a frustrated press release Ford issued, demanding a congressional investigation into UFOs.

The investigation never happened. What Hynek saw and whether it was actually swamped gas, this Michigan Radio report is worth reading.

Today, the military is being very careful not to appear flippant about UFOs.

In fact, the number of UFO sightings logged by the US government near government property is on the rise, a US Navy Intelligence official told lawmakers on Tuesday in the first public congressional hearing on UFOs in more than 50 years.

Remove the stigma of UFO sightings. Call them UAPs

Bray said the military has worked hard to remove the stigma around reporting UFOs, which they refer to as “unexplained aerial phenomena,” or UAPs.

There’s a process, introduced in 2019, for Navy pilots and other military personnel to report a sighting. Guidelines are posted in the cockpits of military aircraft.

“The message is now clear: If you see something, you need to report it,” Bray said.

An official office of UAP inquiry

The Pentagon recently created a dedicated office to “facilitate the identification of previously unknown or unidentified airborne objects in a methodical, logical and standardized manner,” according to another official, Undersecretary of Defense for Intelligence and Security Ronald Moultrie.

Critics of the office, such as Luis Elizondo, the former head of an informal UFO review within the military that helped spark new official interest, have worried that the emphasis on intelligence will cut down on transparency and accountability.

Sightings are on the rise

When the Office of the Director of National Intelligence released a landmark report on UAPs in 2021, it referred to 144 reports from government sources.

That figure now exceeds 400, Bray said, although many of those reports are from previous years and most lack the documentary evidence that might be needed for a more thorough investigation.

Evidence is hard to come by

Bray showed several videos to lawmakers: one featuring a few frames of a fast-moving UAP that has not been identified, and two featuring triangle-shaped lights recorded by the camera through night vision goggles. The government now thinks it’s an illusion of light passing through the goggles and into the camera that created the triangular shape.

The idea behind this new UFO openness is the government wants to better understand unexplained objects to make sure they don’t represent some new and threatening technology.

“Any object that we encounter can likely be isolated, characterized, identified, and if necessary, mitigated,” Moultrie said.

Most objects can be explained

UAPs often end up being weather balloons or new technology. But there is a bin of unexplained incidents that require more study, Bray said.

Both officials said they are committed to transparency.

“Our goal is not to potentially cover up something,” Moultrie said.

But they’re not exactly committed to total openness and talked about a balance between transparency and what Moultrie called “preserving our warfighting advantage.”

That’s a gaping and subjective loophole. Conspiracy theorists will worry the lawmakers heard the really juicy stuff at a classified hearing later Tuesday.

There is certainly now agreement that there’s danger in the unexplained.

“Unidentified aerial phenomena are a potential national security threat, and they need to be treated that way,” said Rep. André Carson of Indiana, the Democratic lawmaker who convened the hearing.

The top Republican at the hearing said he’d rather hear about hypersonic weapons the US knows are being developed by China and Russia, but UAPs are a worthy topic too.

“Inasmuch as this topic may help us better understand unknown activities of Russia and China, I am on board,” said Rep. Rick Crawford of Arkansas.

More disclosures across the intelligence community

Moultrie argued there’s a movement toward more disclosures in the intelligence community. I think Moultrie was referring to the disclosure of intelligence about Russia’s plan to invade Ukraine when he said the following:

“Just over the last three or four months, I think that the intelligence community and the national defense apparatus have disclosed more info on various events than it has in probably the previous 10 years.”

Even this appearance of transparency is a very different approach to UAPs than the secretive government UFO sighting program of the ’40s, ‘50s, and ‘60s. Specifically, Project Blue Book, run by the Air Force, is what launched a million conspiracy theories. Think Roswell, New Mexico.

Project Blue Book was shuttered in the late ’60s after 12,618 sightings were reported and 701 remained unexplained. Read about it at the National Archives website.

The program was expensive, and none of the reported UFO sightings were shown to be a national security threat, according to the Air Force.

When the catalog of recent UAP sightings was released by the Director of National Intelligence in 2021, CNN’s Anderson Cooper talked to retired Navy Lt. Commander Alex Dietrich.

She was one of the pilots who witnessed a UAP in November 2004. It was recorded on grainy video in the famous “Tic Tac” video (the object was white and oval). It moved in unexpected directions at shocking speed and had no visible means of propulsion.

And read some possible terrestrial theories for what it might be in this San Diego Union-Tribune report.

Dietrich described “interrogation-style” interviews with the Office of Naval Intelligence after that sighting. But she said it was important for people who see unexplained things to come forward so that experts can study and explain them.

Additionally, the National Defense Authorization Act required the military to create a permanent office to house UAP investigation efforts, along with an annual report and briefings to Congress twice a year. The office is known as the Airborne Object Identification and Management Synchronization Group (AOIMSG) .