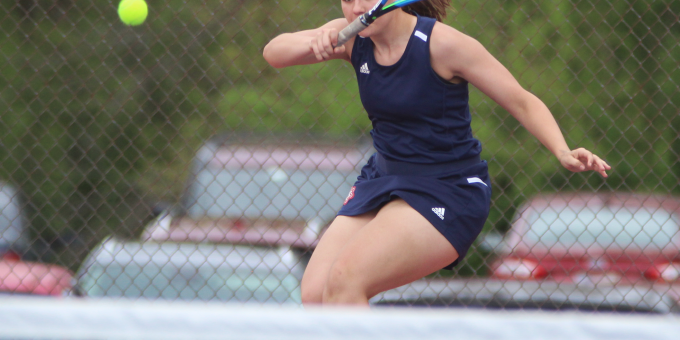 BLOOMINGTON – Bedford North Lawrence cruised into the semifinal round of the IHSAA sectional with a 5-0 conquest of Martinsville during high school tennis action on Wednesday.

The match was originally scheduled at Bloomington South, but the weather conditions forced a move to the indoor courts at Indiana University. That switch didn’t bother the Stars, who conquered the Artesians for the second time this season while advancing to the next round.

The Stars had no trouble in doubles. Bella Stigall and Mallory Pride pounded Kait Collins and Ainsley Lowder 6-0, 6-0 at No.1, while Kenley Craig and Izzy Alldredge swept past Hannah Niese and Selah Wolff 6-1, 6-2 at No.2.

“We worked as a team on passing shots and making the right shot placement,” Stigall said. “I think they did a really good job of putting that in their game today. Rachel was killing it on her court today. That was the best I have seen her play, and I am so excited for her that she got to have a match like that.

“All in all, we were solid on all courts.”

BNL (13-5) will face Bloomington North in the semifinal on Thursday, while Bloomington South will clash with Edgewood in the opposite bracket. The final is set for Friday.

First round at Bloomington South