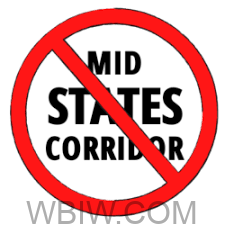 JASPER – In response to the State of Indiana’s recent announcement of a preferred route for the proposed “Mid-States Corridor,” five environmental and community organizations today released a joint statement opposing any new-terrain highway construction due to the negative environmental impact it will bring to southern Indiana’s forests and wildlife habitats, water quality, air quality and the communities along the highway’s path.

The group’s statement reads: “We are categorically opposed to any new-terrain highway routes – including Route P – based on the following:
● The costs of building a new terrain highway do not justify the devastation to the environment.
● Building any new-terrain highway through the farms, forests, and wetlands of southern Indiana will increase pollution, and decrease air, water, and soil quality.
● Hundreds of Hoosiers will see their family’s homes, farms, and businesses destroyed.
● Displacing Hoosiers does not justify the proposed project need.
● The time saved for motorists is negligible, as per the stated goals of the project.
● There is a far greater need to fix existing roadways and explore alternative transportation options.”

The groups are asking concerned Hoosiers to submit comments during the formal comment period which ends May 31, 2022. All comments are considered equally, regardless of how they’re submitted, and will be included in the Final Environmental Impact Statement.

Concerned citizens may:
● Submit a comment online at https://midstatescorridor.com/deis/.
● Email comment to Info@Mid-StatesCorridor.com
● Write a letter or print a form online, and mail or drop off at VUJC Administration Building, Room 216, Jasper, IN 47546
● Visit the project office to share feedback

On April 15, 2022, the Indiana Department of Transportation (INDOT) published their Tier 1 Draft Environmental Impact Study for the proposed “Mid-States Corridor,” a highly contested project originated by the Mid-States Corridor Regional Development Authority. In the study, INDOT consultant the Lochmueller Group studied five routes – B, C, M, O, and P – and identified Route P as having the “lowest impacts to environmental resources among Alternatives M, O, and P that meet core Purpose and Needs goals.”

Route P connects I-64 to I-69 through Dubois, Martin, and Daviess Counties. The route will parallel US 231 with bypasses around Huntingburg, Jasper, and Loogootee. Dubois County resident and representative for the Coalition Against the Mid-States Corridor Mark Nowotarski says his group supports the announced improvements to the existing US 231 from I-64 to I-69 which will allow for better traffic flow, without the destruction that a new terrain highway will have.

“This project represents ridiculous extravagance and fiscal waste on the part of the political leaders supporting this project,” said Indiana Forest Alliance Executive Director Jeff Stant. “There is zero need – unless you own a trucking company – to build a new-terrain road right beside 231 when the state has already committed $75 million to upgrade to 231.”

“We are asking every Hoosier, no matter where you live, to write Governor Holcomb today, and urge him to withdraw the plan for a new-terrain Mid-States highway – on any route – and to reevaluate the best approach to providing true mobility, safe roads, and bridges, and meaningful choices for alternative transportation including public transit and pedestrian/bicycle facilities. Tell the Governor that a new-terrain highway that takes thousands of acres of land, destroying forests, wetlands, and farmland, will degrade the region’s quality of life rather than improve it,” said Tim Maloney, Senior Policy Director for the Hoosier Environmental Council.