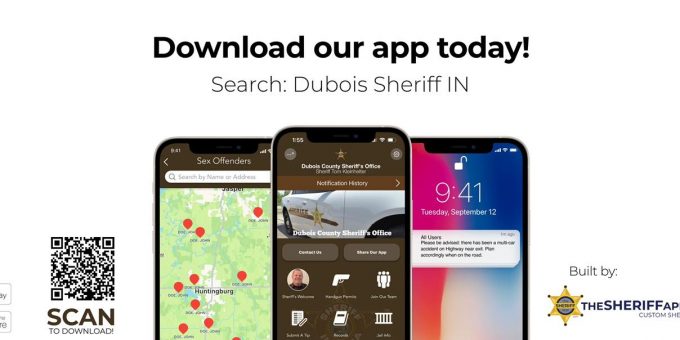 On Friday, Dubois County Sheriff Tom Kleinhelter announced the release of the office’s new smartphone application, which he says will serve as a new way for the Sheriff’s Office to connect with Dubois County residents and visitors, providing information quickly and efficiently to anyone with a smartphone. The apps for Daviess and Knox county work the same.

The smartphone app was developed by TheSheriffApp.com, a division of OCV, LLC.

“Over 80 percent of people in the United States own and use smartphones as their primary means of communication,” OCV Vice President Kevin Cummings said. “Mobile apps offer agencies a better way to alert, inform and prepare the public. Apps allow public safety agencies the ability to reach and serve their citizens where they are: their smartphones.”

To download the free app, the sheriff’s office says you can just go to your App Store or Google Play and search for “Dubois Sheriff IN.” or “Daviess Sheriff IN” or Knox County Sheriff’s IN”.