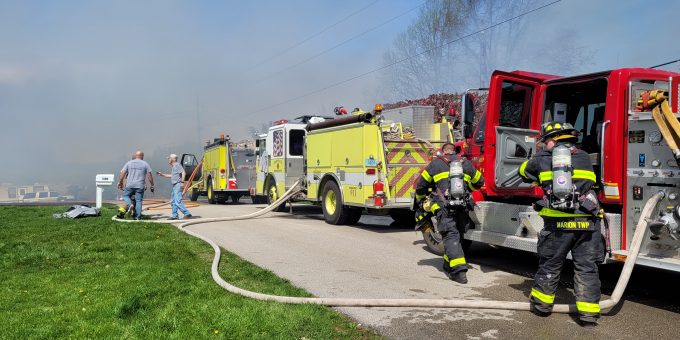 BEDFORD – One person was transported to the hospital by IU Health Ambulance Service after suffering burns to her feet and smoke inhalation Friday afternoon, as firefighters fought back the flames at 124 Eastern Heights Drive.

Shawswick Township Volunteer firefighter Keith Brown was also treated by EMS personnel for smoke inhalation and heat exhaustion at the scene. He returned to the fire scene to help fight the fire following treatment.

The initial 911 call came in at 11:08 a.m. reporting a fire in the bathroom. The fire then quickly spread throughout the home and damaged a home next door. Firefighters were able to quickly keep the fire from causing more damage to the other home.

Firefighters from Shawswick, Marion, Indian Creek, Oolitic, Pleasant Run Township Volunteer Fire Departments in Lawrence County were dispatched to the scene. Owen Township in Jackson County sent a tanker and manpower to assist. A total of 20 firefighters helped bring the fire under control.

Homeowners across the street had to use garden hoses to keep the embers from the fire from catching their homes on fire. Firefighters were challenged in fighting the fire due to fallen power lines, and high winds. Firefighters were on the scene until 2:45 p.m.