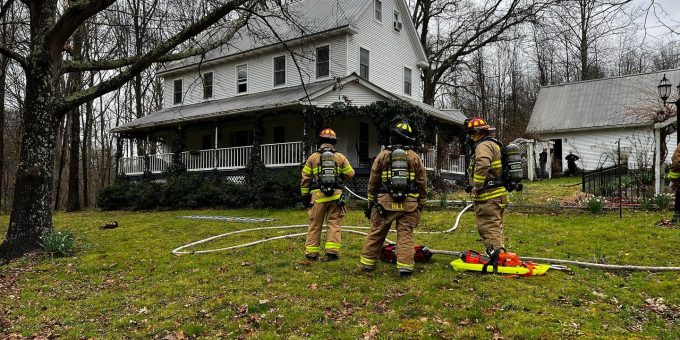 The fire was located in the small attic space above the second-floor ceiling. Firefighters had a little trouble getting to the fire as the ceiling was pitched and covered with shiplap wood. Once firefighters were able to remove some of the shiplap, they were able to extinguish the rest of the fire.

The cause of the fire was ruled a lightning strike from weather that occurred in the morning. The lightning struck the chimney and metal roof before traveling down into the kitchen blowing out part of the stove and then grounded into the basement.

The homeowners were home at the time of the lightning strike and saw it and heard it happen. before one of them noticed smoke in the upstairs bedroom, prompting them to call 911.

Due to the type of construction of the home firefighters made sure to check all levels of the home for any possible hidden fire in the walls.

No injuries were reported. Monroe Fire Protection District was assisted on scene by IU Health Lifeline Ambulance and REMC.