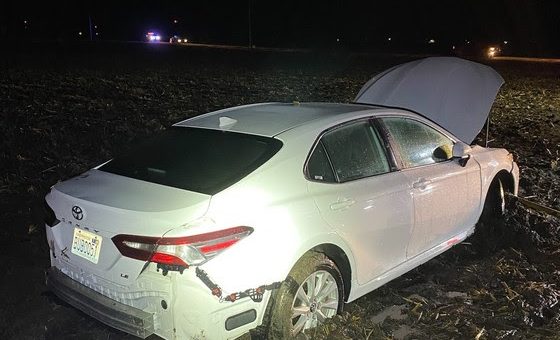 The driver refused to pull over and continued to travel at highway speeds of 70 mph. A vehicle pursuit was initiated as the vehicle continued southbound on I-65 where the vehicle’s speed ranged from approximately 60 mph to 80 mph for approximately 10 miles.

The vehicle continued southbound where it ran off the right side of the road near the 196 mile-marker.  The driver continued to flee southwest from I-65, driving into a field for a few hundred yards. Jasper County Sheriff’s Deputies were able to place the suspect under arrest in the field without further incident.

The driver, Jarrett Astin Rivera, 31, from Indianapolis, had an active arrest warrant through the Marion County Sheriff’s Office. Rivera was also found to be in possession of suspected marijuana, paraphernalia, and a legend drug. Evidence at the scene led officers to believe Rivera destroyed suspected narcotics prior to being taken into custody. Mr. Rivera was transported to the Lake County Jail, due to that being the county where the pursuit originated.