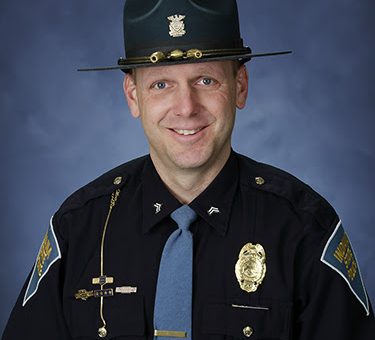 FORT WAYNE –  After 26 years of service with the Indiana State Police, Master Trooper Jason House will officially retire from duty.

Master Trooper House, a native of Fort Wayne, graduated from Northrop High School in 1991. He received an Associate’s Degree from Vincennes University in 1993, and then graduated from Manchester College in 1995 with a Bachelor’s Degree in Criminal Justice.

Master Trooper House was appointed as an Indiana State Trooper on December 24, 1995, after graduating from the 53rd Indiana State Police Recruit Academy. House was first assigned to the Lowell Post where he worked on the Trump Casino boat from 1995-1997.  In 1997, House was promoted to Detective and transferred to the Fort Wayne Post, where he served in that capacity for approximately 10 years. In 2007, House was promoted to the rank of Corporal and assigned as a District Duty Officer at the Fort Wayne Post. Then in 2018, House requested a road patrol assignment for the Adams and Wells County area(s), where here he would ultimately serve out the remainder of his time as an Indiana State Trooper.

The final day of a trooper’s career is spent turning in the department-issued badge, weapon(s), uniforms, equipment, and patrol car, all of which have been a part of that trooper’s daily life and identity for many many years.  The parting of ways with department-issued gear is followed up by an exit meeting with the Superintendent for one final presentation… the retirement credentials.  This transitional process into retirement can be (often is) a very emotional day for a state trooper.

Jason’s transition, however, is only a prelude to the beginning of his new career as a Public Safety Officer at the Public Safety Department of the Fort Wayne Airport Authority.  As an FWAA Public Safety Officer, Jason will have trilateral responsibilities, meaning each PSO is certified and sworn for police, fire, and medical response to incidents occurring on airport properties.  As an active longstanding member of the Ossian Volunteer Fire Department, Jason is excited for this new chapter in life and is expecting a smooth transition.

Jason and his wife Lisa are longtime residents of Ossian, where they will continue to reside with their two sons, Logan and Ryan.