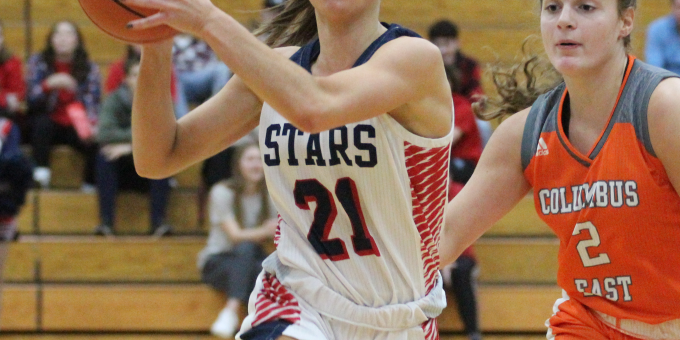 BEDFORD – With her team in trouble, leaking turnovers like a worn-out engine spews oil as Bedford North Lawrence shifted into hyper-drive defense and revved the pressure to the red line, with a Hoosier Hills Conference championship at stake, Columbus East veteran Koryn Greiwe swooped to the rescue.

Not with scoring, because the all-time East leader in points had already done that damage. Stars are more than one-dimensional curiosities or attractions. Greiwe showed her savvy, her unselfish willingness to create rather than force, and plunged a dagger into BNL’s title aspirations.

Greiwe set up East’s final two baskets during a frenzied finish, added two clutch free throws, and led a deserved East celebration as the No.14 Olympians took a gigantic step toward defending their league title with a road victory that earned a double fist-pump reaction from coach Danny Brown as the final horn sounded.

After holding on like a climber clinging for life on a sheer rock wall, East scrambed to the summit for a 58-51 victory over No.2 BNL on Tuesday night. Greiwe finished with 19 points and Saige Stahl added 16 as East (14-3 overall, 4-0 in the league) stunned the Stars and assumed command of the conference race as it nears the conclusion.

How big was the victory? Greiwe’s dark eyes danced with delight, her smile radiated, and her team’s triumph resonated across the state. BNL (16-2, 4-1 in the HHC) suffered its first loss against Indiana competition this season, a setback that will end debate about BNL’s disputed place atop the rankings. The Stars fell hard, and Greiwe was the one that gave them the push off the cliff.

BNL, which had trailed by as many as 12 points, had desperately battled back within one point – and missed multiple chances to take the late lead. But during the final 2:40, with so much in the balance, Greiwe and her tall friends made the big plays. Greiwe’s baseline drive and dish to 6-3 center Harley Gant (who won a reach battle for the pass over a smaller defender) gave East a 52-49 lead. Her lob to Saige Stahl for a layup with 1:25 left made it 54-51. And when BNL finally flinched, her two free throws with 40 seconds remaining were the clinching points.

“I love my teammates,” she said. “I‘m so happy they were there.”

With East toasted the achievement, the Stars shed tears over opportunity wasted. They were so eager for revenge of last season’s heartbreaking loss at East, so determined to clinch at last a share of the HHC title. But they fell behind early, spent an eternity in catch-up mode, and never got there. BNL never led.

“Some days are going to be like that,” BNL coach Jeff Allen said. “It wasn’t our day. I thought it was East’s day. They played well. The better team won today. That just happens in basketball. It’s disappointing for us. That’s two times in a row. And to lose at home and not play as well as we can.

East made it that way. The Olympians took advantage of their Mount Olympus-like size advantage, dominating the glass, blocking multiple shots (even at the 3-point line), deflecting passes and altering point-blank looks. The Stars were a dismal 19 of 59, frigid when even lukewarm would have been enough as East coughed up 26 turnovers – 12 during a messy third quarter. Brown shrugged that off.

“We won, I don’t care about turnovers,” he said. “We beat Bedford at Bedford, we played well, We had to be at our best, and for the most part we were. This team is different. This team is mature, experienced and talented.

“Koryn’s more than the leading scorer in East history. She’s our leader. She’s under the radar (on the recruiting scene). I don’t know why.” Wins like this will turn more than a few heads.

East’s best was its electric start, and BNL has seen that before. The Stars had vowed to not repeat the shocking 24-3 opening to last year’s loss, yet here were the Olympians hitting their first five shots, bolting to a 13-5 lead, extending that to 31-19 midway through the second quarter.

“We were so focused,” Greiwe said. “We had a lot of energy, we were prepared for them. We knew it would be a dogfight.”

BNL’s grit cannot be questioned. The Stars clawed their way back, dialing up maximum ball pressure on defense. And it worked as East fumbled the ball away like it was greased, converting only one shot in the third quarter. BNL trailed 42-32 when it made its move. Carlee Kern got loose for layup and Karsyn Norman drilled a 3-pointer to start the charge. Kern scored again from close range, Chloe Spreen grabbed a rebound off a missed free throw and scored, and Kern collected another second-chance basket. Madisyn Bailey’s free throw made it 46-45 with 4:50 left.

Then came the back-and-forth volleys. Stahl made a bucket, but Bailey turned a steal into a layup. Greiwe powered her way to a layup, but Spreen popped a 15-footer in the paint. That set the stage for the final rush.

East didn’t handle the defensive attack very gracefully, finishing with 16 turnovers in the second half. But when it got the ball inside, it was devastating. Gant, who banged her head on the hardwood during a fall in the third quarter and missed some time to clear the cobwebs, didn’t miss and totaled 10 points. Leah Bachmann had a game-high 11 rebounds.

“We had a lot of trouble with their size,” Allen said. “We allowed them too much room and didn’t put enough pressure on them in the first half. That got us back in the game, but then we struggled making shots. And it wasn’t just perimeter shots, it was layups, too. Some days are just like that.

“When we needed a score, we had a tough time making shots. The girls were getting frustrated. All you can do is keep working, and I was proud of their effort. The effort was outstanding. But they’re a good team, they made shots. And shots we didn’t make. You have to put the ball in the basket.”

Norman paced the Stars with 17 points, Spreen totaled 15 and Kern added 12. BNL’s ultimate demise can be traced to the third quarter, when they hit only 2 of 17 shots while East kicked it all over the court. Greiwe could sense the danger, but didn’t panic. “Always keep an even keel,” she said. “We were staying calm, being patient. We got it done, and it’s an awesome feeling.“

Actually, East isn’t done. The Olympians still have HHC clashes with New Albany (Jan. 15) and Jennings County (on the road on Jan. 20). The Stars will be rooting for help if they want to claim a share of the title.

“Our conference is tough,” Brown said. “We haven’t finished business yet. It’s not over yet.”