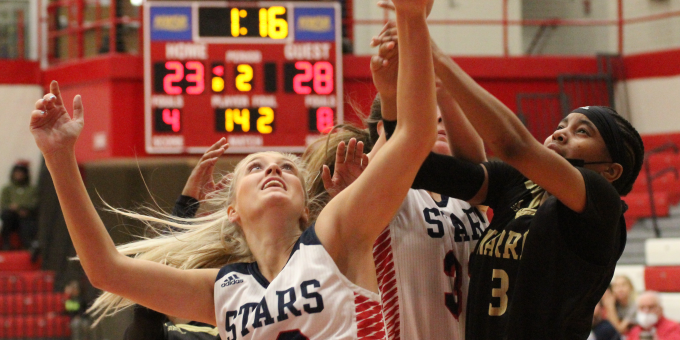 BEDFORD – Freshly minted as the new No.1 in the Class 4A poll, crisper than a new $20 bill, Bedford North Lawrence will discover the spending power of its new currency almost immediately. Bitcoin or get bit? Legit or counterfeit? The Stars will find out when they visit a dangerous nemesis on Saturday afternoon.

The Stars (15-1) will travel to No.13 Castle, ready to defend their new status and expecting a tough challenge. The Knights (12-3) are just now building toward full economic power after waiting for the return of a star from early-season injury. They would love to send shockwaves across the state and bring a quick end to BNL’s lofty ranking.

Polls are just published opinion with no real monetary or court value. Take that check to Starbucks and you’ll still need $5 for coffee. But the Stars appreciate the recognition. For a program with four state championships, the true worth is winning the finale. Prove No.1 in February. They will just take this latest accolade in stride. Pressure already comes with the uniform.

“It’s a huge compliment, recognition for us to get to No.1,” sophomore star Chloe Spreen, who is fast growing accustomed to attention, said. “We’ve work hard, played hard, and we’re starting to come together. All the hard work is paying off. But there are more things to do.

”It’s not made us have any more pressure than we already have. We know we will get their best. We have to play our hardest. Our team will keep doing what we do.”

What does BNL do? Play defense, play intelligently, play with passion, play hard. And that also describes Castle, which can usually match the Stars in all those phases. Bob Meier has guided the Knights to three sectional titles and a regional crown (at BNL’s expense) during his previous four seasons and beaten BNL three times in five meetings. There will be no intimidation factor, even with No.1 on the marquee. If anything, it will add to Castle’s fervor.

“Any time you play Castle, it’s a tough game,” BNL coach Jeff Allen said. “It will be a tough environment. We know what we’re up against. They’re good.”

How good is still to be determined. Castle started the season without senior standout Natalie Niehaus, who suffered a severe ankle injury on the morning of the state volleyball final and missed the first seven games of the basketball campaign. Still not quite 100 percent in Meier’s estimate, Niehaus is averaging 11.0 points, while senior guard Jordan Coon is the scoring leader at 12.0. Castle, which owns a six-game winning streak and that’s no coincidence with the Niehaus return to action, also has veteran leadership in senior guards Ky Hay-Swope and Megan Kain (8.4).

“We’ve done a nice job in regard to the challenges we’ve had to deal with,” Meier said. “Hopefully we’re ready to fight and compete. We’ll be ready to give them our best.”

“Those kids play extremely hard, they’re very aggressive defensively in trapping and pushing you out of what you want to do,” Allen said. “We have to be sharp with the basketball and not turn it over. That will be the main concern.”

BNL will counter with Spreen (team highs of 16.1 points and 6.0 rebounds) and electric junior point guard Karsyn Norman (14.9 points after a career-high 30 against Warren Central, plus 2.9 assists and 3.3 steals as the backcourt stopper). And they’re getting key contributions from the supporting cast, with starters Mallory Pride, Madisyn Bailey and Carlee Kern all totaling 6 points per game.

“They’re effective going both ways,” Meier said of the spotlighted combo. “It’s hard to pinch them to a side, where the tendency is to force them to a weak hand. Trying to move them to one side or the other is very challenging. They have speed, and they’re competitors. They don’t lIke to lose, and you can tell in the way they play with their intensity and their passion.

”You can tell they’re a team that has taken pride in their individual craft. They’re playing hard, they’re doing a good job.”

BNL won last year’s clash 60-38, with Irye Gomez and Chloe McKnight scoring 15 points each. Hay-Swope led the Knights that day with 10 points. Castle suffered a miserable shooting performance (12 of 41), and Niehaus was limited to 4 points while hitting 1 of 12 from the field.

“We did a good job, and that was a little of her having a bad day,” Allen said. “She’s really good. I don’t look for us to be able to control her that well again. It would be great if we did, but I don’t expect that out of her.”

What is expected is a high-level battle. The Stars bring out the best, especially with the new ranking.

“We already get teams that play as hard as they can play,” Spreen said. “Before every game, Coach is telling us we will get their best game. It’s the same thing that we have to keep doing, playing our game and playing hard, going at people. Nothing will change. We still have a lot to get done.”

Last meeting: Last year at BNL, the Stars hit 11 3-pointers while shooting down the Knights 60-38. Irye Gomez and Chloe McKnight had 15 points each for BNL, while Ky Hay-Swope had 10 points for Castle.

Game notes: BNL has won the last two meetings after the Knights swept two from the Stars during the 2018-19 season. BNL’s current 37-4 record over the past two seasons is the fourth best in the state.