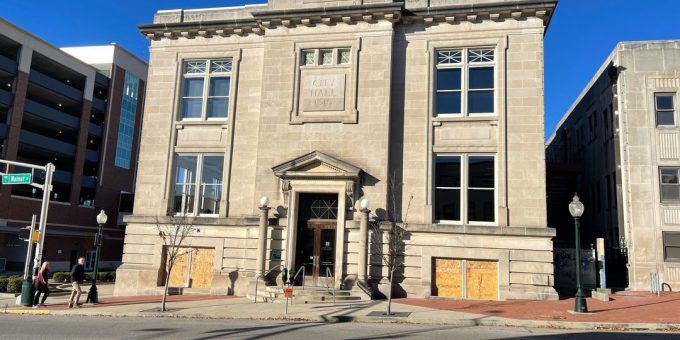 BLOOMINGTON – The Waldron Arts Center opened on Tuesday, January 4 for use by the public and visual and performing artists. This follows a 21-month closure, during which time the City of Bloomington completed repairs to both stabilize and upgrade the facility.

Large events are not expected to take place in the venue until later in the year due to the recent rise in COVID cases, and a reopening celebration originally planned for Friday, January 7 will be rescheduled.

Repair of the facility follows recommendations made by the community-led Waldron Task Force (bloomington.in.gov/news/2021/05/06/4840). In May of 2021, Mayor Hamilton announced a $515,000 commitment for capital improvements to address deferred maintenance on the facility as part of the Recover Forward initiative to help the community recover from the COVID-19 pandemic.

In keeping with its commitment to making the building once again safe and welcoming, the City upgraded the building’s HVAC system to comply with Actors Equity Association requirements, restored the building’s windows in a historically accurate manner, completed roof repairs and tuckpointing on the north and west sides of the building, upgraded all light fixtures to LED, and repaired water damage throughout the building. Currently, the City is working to repair the downspout filtration system to prevent future flooding in the building.

“This substantial public investment in the required repairs at the Waldron demonstrates the City’s commitment to the arts in Bloomington,” said Mayor Hamilton. “The arts need a public space that they can call home. While the Waldron is not a purpose-built space, it continues to serve our arts community, contributes to our local economy, and improve our community’s quality of life. I’d like to thank the many volunteers and staff that have contributed to reopening The Waldron.”

For the first six months of 2022, the City will manage the Waldron, facilitating programs and exhibitions. As recommended by The Waldron Task Force, the City is in negotiations with a third party for long-term management of the building beginning in July of this year.

Cardinal Stage, the Jewish Theater, and Stages have scheduled performances at the Waldron during the first half of the year 2022. Work by members of Bloomington’s visual arts community, including members of the Bloomington Photography Club and Bloomington Open Studios Tour, will be on view in the building’s visual arts galleries in early 2022. Inquiries about using the Waldron Arts Center can be directed to Holly Warren, Assistant Director for the Arts, City of Bloomington, at holly.warren@bloomington.in.gov.

The ownership of the Waldron reverted to the City of Bloomington in January 2021 following its use by Ivy Tech Community College as classroom, performance, and display space since 2010.