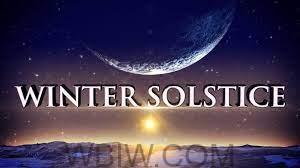 Today is the astronomical first day of winter in the Northern Hemisphere and the shortest day of the year.

Think of it this way: Although the winter solstice means the start of winter, it also means the return of more sunlight. It only gets brighter from here.

This is all thanks to Earth’s tilted axis, which makes it so that one half of Earth is pointed away from the Sun and the other half is pointed towards it at the time of the solstice.

We often think of the winter solstice as an event that spans an entire calendar day, but the solstice actually lasts only a moment. Specifically, it’s the exact moment when a hemisphere is tilted as far away from the Sun as it can be.

Another way to think of this is that on the day of the solstice, the Sun’s path reaches its most southerly point in the sky. For those of us in the Northern Hemisphere, this means that the Sun’s path is as low in the sky as it can get even at “high noon.”

The day of the winter solstice is the shortest day of the year, which means that it’s the day in which we experience the least amount of daylight.