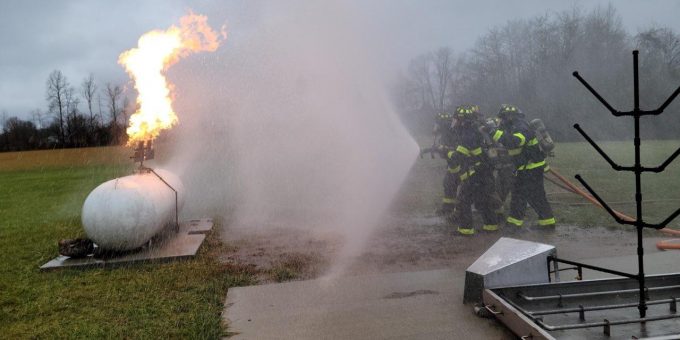 JD Ramsay, safety officer of Shawswick Volunteer Fire Department and who is also a certified state instructor, said these firefighters will complete more than 180 hours of education and training before becoming firefighters.

Auto Extrication is the process of removing a vehicle from around a person who has been involved in a motor vehicle crash when conventional means of exit are impossible or inadvisable due to injuries suffered.

A delicate approach is needed to minimize injury to the victim during the extrication.

“Whether the incident involves only one victim or mass casualties, acquiring scene awareness is a critical first step that emergency responders take to decide what extrication device to use,” said Shawswick Volunteer Fire Department Chief Bobby Brown.

Ethan Grissom, a Marion VFD firefighter, shows fellow firefighters how to use a spreader to open a vehicle door.

“I just like helping people,” said Grissom. “I have been a firefighter for 3 years and an EMT for two years. That is why I got into firefighters and EMT to help others, plus it’s fun.”

These products include extrication tools, such as cutters, spreaders, and rams.

Spreaders: Hydraulic spreaders are primarily used for compressed car frames and other damaged and collapsing structures. Like a pair of reversed scissors, spreaders start in a closed position and apply outward force, moving apart steel and fiberglass frames with ease, giving victims the space to be removed from a hazard. Also known as The Jaws of Life spreaders can remove a car roof in roughly two minutes.

Cutters: A more efficient version of the old-school circular saws and the opposite of spreaders, cutters operate like scissors on steroids. Using immense hydraulic pressure, they cut through metals to remove damaged and dangerous obstructions, allowing openings for firefighters to extricate victims.

Rams: While creating openings are important, there are times when a firefighter needs to dislodge parts of the wreckage, like a steering column or a dashboard. That’s where rams come in, where a sturdy metal alloy rod is pressed forward to punch or ram apart sections of an accident that may be pinning a victim down and preventing their extrication.

Combination Tools: Instead of carrying multiple tools around, combination tools allow firefighters to use one device to both cut and spread damaged areas and extricate victims. A combination tool can shave precious seconds off a rescue, lessening the chance of harm or stress to a victim.

Firefighters are often called to deal with leaks in lines leading from propane tanks to homes.

During propane tank fires, the potential always exists for an explosion known as boiling liquid expanding vapor explosion (BLEVE). The firefighters were warned that, in the event of a propane tank explosion, debris and flames would spread in all directions and likely kill anyone present at the time of the explosion.

Liquid propane from a separate tank was fed through supply lines into the simulator and ignited to simulate an actual propane tank fire. After instructors ignited the simulator and turned up the propane volume, flames shot about 30 feet into the air and burned with an almost-white-hot intensity. The propane was burning at a temperature of between 2,500 and 3,000 degrees Fahrenheit.

How should firefighters approach a car fire?  Carefully, from an upgrade position, preferably upwind.  In case there is a release of a flaming product, firefighters want to watch it run away from them, rather than towards them. Firefighters use two lines to attack a vehicle fire. One line serves as the primary attack line, the other is a backup; just in case something goes wrong.

According to the National Fire Protection Association, data indicate that United States firefighters respond to a vehicle fire every 2½ minutes.

If the engine compartment is involved in a fire, it is very likely that fuel or other combustible fluids (brake, oil, etc.) are contributing to it. Therefore, you may need to apply foam or a foaming/wetting agent to effectively suppress it, and control runoff to prevent environmental damage or running fuel fire.

If the vehicle runs on alternative fuel, such as LP gas, natural gas, or ethanol, the risk to firefighter safety is potentially greater than it would be with gasoline or diesel fuel.

If the fire is extinguished with a hose line, firefighters will need to cool the vehicle and surrounding area to prevent any leaking fuel from re-igniting.

This is called “venting the roof.” There are two basic reasons for this practice. Dangerous gasses and dark smoke accumulate in a burning building. It is impossible for firefighters to see in this environment. When a hole is made in the roof, the smoke and gases escape. Venting the roof makes it easier for firefighters to see and find the source of the fire, and it also reduces the possibilities of backdraft and flashover. Another reason for venting the roof is to see how far the fire has progressed. One of the fastest avenues through which fire is spread is the attic. Heat and smoke rise to the attic where the fire can move quickly. Firefighters may go ahead of the fire and cut holes in the roof to release the heat and stop the fire from spreading through the attic.

“I have been with Mitchell for about six months, before that I was with Williams and then Huron,” said Jewell. “I love to help people. This is my way to give back to my community.”