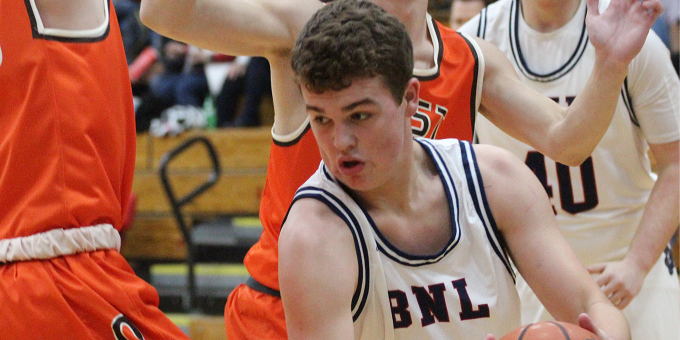 BEDFORD – The mission, Bedford North Lawrence has chosen to accept, is a covert operation behind enemy lines. The code name is The Falcon and the O-man. And as always, getting caught will mean disavowing any knowledge of the actions. Impossible?

The Stars, basking in the afterglow of victory, will become shadowy road spies on Friday night, making the long journey to Madison, hoping to avoid the self-destruct mode. The Cubs have struggled during the first two weeks of the season, but offensive threats Jackson Falconberry and Kaden Oliver are dangerous and explosive.

Oliver leads Madison (1-4) in scoring at 21.6, while Falconberry contributes 18.0. Both have hit 30 already this season. That’s firepower BNL (1-3) has yet to display, although the return of junior leader Colten Leach has given the Stars a morale boost and a much-needed force on that end of the court.

Leach played approximately 15 minutes during his belated debut (following off-season knee surgery for the second time in two years), and he totaled modest numbers of 7 points and 5 assists during the 50-34 triumph over Columbus East. His impact was greater than any boxscore stats.

“The addition of Leach – not that he did a lot in the minutes he played – but his presence out there took so much pressure off,” BNL coach Jeff Hein said. “You could see they looked a lot more comfortable. We’re a better team with him on the floor. It gives us more options.”

BNL’s constant, even while scoring seemed impossible at times, has been outstanding defense. The Stars are allowing only 44.5 points per game, putting out oversized effort with an undersized roster. That trend will be tested by Madison’s dual menace.

“Oliver really elevates on his jump shot, he’s playing really well right now,” Hein said. “Falconberry can handle the ball and score, too. It obviously starts with those two guys.”

BNL’s bigger issue will be solving Madison’s extended 3-2 zone, with the 6-5 Falconberry causing chaos at the top. First-year coach Adam Stotts, who spent three years as an assistant and took over when former coach Sherron Wilkerson departed for Logansport, switched tactics after the first three games.

“It’s special preparation for us, something we haven’t played against this year,” Hein said. “We don’t see a lot of zone because the teams we play believe they have better athletes than us. So we have to do a good job of figuring things out. It’s brought them a long way defensively. It’s like a Rubik’s Cube, if you don’t figure it out early you’ll get behind.”

BNL didn’t figure out Madison until too late last season. The Stars fell into a 14-3 hole, battled all the way back and even took a lead in overtime. But Madison’s Luke Ommen hit a baseline jumper at the buzzer to give the Cubs a thrilling 54-52 triumph. Luke Miller had 21 points for Madison. Falconberry and Oliver both started that night but combined for only 2 points. Kooper Staley had 20 points and Leach totaled 17 for the Stars.

Last meeting: Last year at BNL, Luke Ommen hit a shot at the buzzer to lift the Cubs past BNL 54-52 in overtime. Luke Miller had 21 points for Madison. Kooper Staley had 20 points and Colten Leach added 17 for the Stars.

Game notes: Adam Stotts took over the Madison program from Sherron Wilkerson, who is now coaching at Logansport. The Cubs went 17-9 last season, their first winning campaign since 2014-15, and lost to eventual state champion Silver Creek in the sectional final.