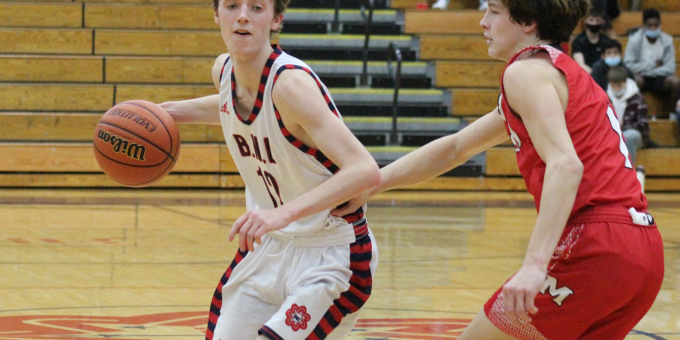 BEDFORD – Tingling, itching hands are, according to lore, a good omen, a sign of money coming your way. Luke Ommen’s hands must have been stinging like he was holding a live electric wire. He was money for Madison.

Ommen hit a whirling 12-footer from the baseline, over two defenders, at the buzzer as the Cubs cashed in their final road trip to Bedford North Lawrence for a thrilling overtime triumph.

Ommen’s clutch turnaround jumper was the final blow of a 54-52 slugfest with the Stars, who rallied from a double-digit deficit in the first half, had the final shot in regulation to wrest victory away, then suffered the ultimate dismay when that good Ommen made it a bad night.

Madison’s final possession started after BNL’s Kooper Staley swished two free throws with 8.1 seconds left. Senior guard Luke Miller, the obvious first option, dribbled to the right wing and spun into the lane, only to meet a double-team obstruction from Colten Leach and Aden Pemberton. As Miller looked to elevate, the ball was poked loose. Miller recovered the ball in midair and found Ommen on the right baseline.

He gathered, turned, rose, faded and fired. Swish. Buzzer. Madison coach Sherron Wilkerson punched his fist in celebration and the Cubs mobbed Ommen for one of those jump-up-and-down group celebrations on the court.

“The stars aligned,” Wilkerson said. “It‘s crazy when you think about it. This is a one of the special places in the country to play. So this was a true blessing for us.”

Crazy? Not really. As Madison prepares to depart the Hoosier Hills Conference, this is one the Cubs (8-2) will remember. And one the Stars (4-6) won’t forget. They fell behind 14-3, scratched back in front late in the third quarter, pulled even on Staley’s long bomb at 46-46, and had the lead in overtime.

BNL coach Jeff Hein pointed to the start, not the finish, as the reason for his team’s demise. Madison hit its first five shots and BNL had five turnovers in the first 13 possessions.

“We didn’t deserve to win it,” Hein said. “Our approach to the game was terrible. We weren’t ready to play. We fumbled the ball all over the place. They were more ready, they looked like more of a team than us.

“Hopefully it’s a life lesson for our kids. The team that plays together wins.”

Lesson 1: don’t miss shots. The Cubs were on fire as Nick Center buried two mid-range jumpers and raced to a layup. Miller’s fadeaway from the wing created the 11-point gap. Madison’s advantage was still 27-18 at the half.

BNL exploded in the third quarter with a 16-6 burst during the first six minutes. Staley and Kaedyn Bennett both ripped two treys and Leach slid through the lane for a go-ahead basket with 1:52 left in the quarter. Miller answered with a trey for a 38-38 deadlock heading to the final frame.

“We told our guys they were going to make a run. You have to withstand it. Certain times it didn’t look like we going to be able to. That’s why you play until the buzzer.”

Madison went up 43-38 to start the fourth, but Bennett made another 3-pointer and Leach went coast-to-coast with a rebound for a layup. Miller drove to a three-point play, followed by the Staley bomb. After a Madison turnover, the Stars got the last look but Staley’s jumper rimmed off.

“We dug that hole, got our ourselves back, had a shot at the end of regulation to win it,” Hein said. “Got a good look by Kooper. Under those circumstances, that’s all we could ask for.”

Leach drove for a basket and a 50-49 lead with 51 seconds left in the overtime. Madison pulled even on a Center free throw, and the Stars missed a point-blank shot. Miller was fouled on that rebound scramble and made a pair at the line with 17 seconds left. Staley answered with his pair at the line, and Madison attacked without benefit of a timeout.

“If they score, immediately take it to the rim,” Wilkerson said of his strategy. “I didn’t call timeout. I felt if we did, they would get their defense set up. In these situations, it’s kind of funny. You find yourself not having full trust in some situations, and you have complete trust in others. This is one that we had complete trust. We had a senior with the ball who made the right decision in the end.”

Miller finished with 21 points, Center totaled 14 and 12 rebounds, and Ommen totaled 12 points as the Cubs won their conference opener.

Staley had 20 points and Leach finished with 17 for the Stars (1-1 in the HHC). Bennett hit three treys for his 9 points off the bench.

“It’s frustrating because, as we sit in the locker room after the game, our kids need to listen to that. That should never happen. There’s no reason someone comes into our house and embarrasses us for two quarters, the way they did, at our place. And get to come in the locker room and hoot and holler, because we didn’t do anything about it.

“We just decided we weren’t going to play tonight. Period.”

The Stars, with the cancellation of the Mitchell game on Friday, will now return to action on Saturday, hosting Jennings County.