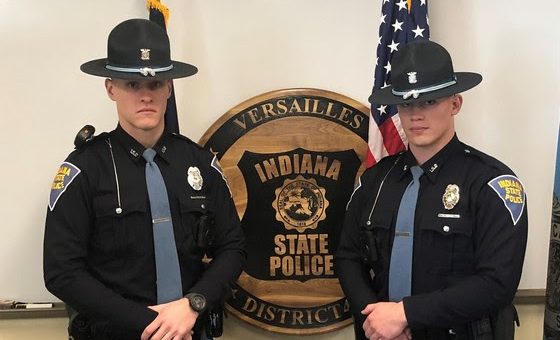 VERSAILLES – On December 2, 2021, twenty-nine probationary troopers graduated from the 81st Indiana State Police Academy. Monday, two of those troopers reported for duty at the ISP-Versailles District.

The two new troopers assigned to the Versailles Post are Troopers Clayton Saltzman and Gavin Ludwig.

Trp. Saltzman, age 26, is a 2014 graduate of Boonville High School in Boonville, Indiana.  After high school, he attended Murray State University where he graduated with a degree in Criminal Justice.  Prior to being hired by the Indiana State Police, Trp. Saltzman worked for UPS. He currently resides in Bartholomew County, Indiana.

Trp. Ludwig, age 21, is a 2019 graduate of Heritage Hills High School in Lincoln City, Indiana.  After high school, he attended Vincennes University where he graduated with a degree in Law Enforcement.  Trp. Ludwig currently resides in Jennings County, Indiana.

After completing the field training program, Troopers Saltzman and Ludwig will be assigned to patrol zone 1, which consists of Jackson and Bartholomew Counties.

Individuals seeking information on a career as an Indiana State Trooper should go to the website located at www.indianatrooper.com. This website will provide a detailed synopsis of the application process, as well as career information about the Indiana State Police Department.