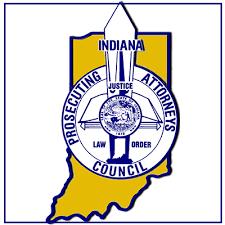 INDIANA – The Indiana Prosecuting Attorneys Council honored several people during its Winter Conference Awards Ceremony this past week, including legislators, victim advocates, administrators, and law enforcement officers. In all, 10 individuals were recognized at the ceremony for their accomplishments during the past year and over the duration of some very long careers.

This was the first awards ceremony IPAC has hosted since 2019, with the 2020 event being canceled due to the COVID pandemic. As a result, there were several winners and some awards were handed out to multiple nominees.

The highlights of the evening were the Powell – Feller and the Stephen J. Johnson awards. The Powell – Feller award is the highest award handed out by the Association of Indiana Prosecuting Attorneys, Inc. and has been given to prosecutors, judges, attorneys general, and governors.

This year, the award was bestowed on Amy Richison, the former Huntington County Prosecutor who recently became a Magistrate Judge in Huntington County. Richison was extremely involved with IPAC during her tenure as a prosecutor, sitting on the Board of Directors and often serving as faculty at training courses. The award was especially poignant for Richison as her father, former prosecutor John Branham, is also a Powell – Feller recipient, winning the award in 2006. Branham was on hand at the ceremony to see his daughter win the award.

“I remember sitting in the audience 15 years ago when my dad won and just being so proud of him,” Richison said. “So to have him and my mom here with me tonight is such an honor.”

The Stephen J. Johnson award, named after former IPAC Executive Director Stephen Johnson, is given to Indiana prosecutors who have provided exemplary service during their careers. The 2021 winner was Tippecanoe County Deputy Prosecutor Timothy Kern, who just celebrated his 40th year at the prosecutor’s office this summer. His boss, Tippecanoe County Prosecutor Pat Harrington marveled at Kern’s dedication, legal acumen, and passion for teaching.

“He’s a hard worker, he’s a great mentor, he’s a brilliant lawyer and I’m so proud of him for winning this award,” Harrington said.

The IPAC Board of Directors also handed out four Legislative Excellence Awards for 2021. The winners were Representative Tim Brown, R-Crawfordsville, Representative Greg Steuerwald, R-Avon, Senator Eric Koch, R-Bedford, and Senator Ryan Mishler, R-Bremen. The four lawmakers were all selected for their work on IPAC’s priority legislation of the 2021 session, the High Tech Crime Units bill.

Rep. Steuerwald was the author of House Enrolled Act 1082, Sen. Koch the Senate sponsor, and both Rep. Brown and Sen. Mishler were selected for their roles as the chairman of each chamber’s budget committees. The legislation will be a game-changer for criminal justice in Indiana and would not have been possible without the efforts of those four lawmakers.

The 2021 award program featured the debut of a brand-new award, the Law Enforcement Distinguished service award, created to celebrate law enforcement officers who have had lengthy and successful careers working with prosecutor offices. The first recipient of this award was Hendricks County investigator Rick Lang, who is retiring at the end of 2021 after more than 30 years in law enforcement.

The awards ceremony also celebrated outstanding office staff in prosecutor offices around the state. As IPAC Executive Director Chris Naylor told the audience, “without the crucial office staff who handle the day to day operations of the office, prosecutors would be unable to do their jobs.”

And Shelby County’s Victim Services Coordinator, Rebecca Miller, was honored as the 2021 Victim Advocate of the Year for her long career in helping crime victims of Shelby County as they try to navigate the often complex legal world.

“The IPAC Board had some very tough decisions to make this year and we are proud of all the nominees that we were able to honor in 2021,” IPAC Executive Director Chris Naylor said. “The awards ceremony is our chance to say ‘thank you’ to those who deserve to be recognized for their service.”