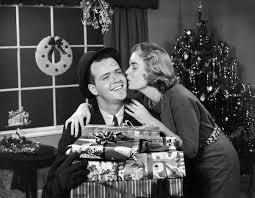 Why do we kiss under the mistletoe?

Many ancient cultures prized mistletoe for its healing properties – and its romantic symbolism.

With evergreen leaves, yellow flowers, and white berries, large clumps of mistletoe are usually observed growing high in the canopies of fruit trees, maples, and sometimes oaks. Although it has a strong association with Christmastime kissing.

Kissing under sprigs of mistletoe is a well-known holiday tradition, but this little plant’s history as a symbolic herb dates back thousands of years. The Greeks were known to use it as a cure for everything from menstrual cramps to spleen disorders, and the Roman naturalist Pliny the Elder noted it could be used as a balm against epilepsy, ulcers, and poisons.

The plant’s romantic overtones most likely started with the Celtic Druids of the 1st century A.D. Because mistletoe could blossom even during the frozen winter, the Druids came to view it as a sacred symbol of vivacity, and they administered it to humans and animals alike in the hope of restoring fertility.

In an old Norse legend, Frigga, the goddess of love, had a son named Balder who was the god of innocence and light. To protect him, Frigga demanded that all creatures—and even inanimate objects—swear an oath not to harm him, but she forgot to include mistletoe. Loki, the god of evil and destruction, learned of this and made an arrow from a sprig of mistletoe. He then tricked Hoth, Balder’s blind brother, into shooting the mistletoe arrow and guided it to kill Balder. The death of Balder meant the death of sunlight—explaining the long winter nights in the north.

By the 1700s, traditional “kissing balls” made of boxwood, holly, and mistletoe were hung in windows and doorways during the holiday season. A young lady caught under the mistletoe could not refuse to give a kiss. This was supposed to increase her chances of marriage since a girl who wasn’t kissed could still be single next Christmas. According to ancient custom, after each kiss, one berry is removed until they are all gone.