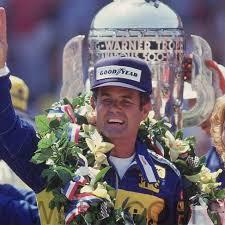 Unser Sr. died at his home in Chama, N.M., the Indianapolis Motor Speedway said. He had cancer for the past 17 years.

“It’s truly a sad day for race fans around the world in saying goodbye to racing royalty Al Unser Sr.  This one man cast such a long iconic shadow over the entire sport and gave fans and families so many priceless memories we’ll hold on to forever.  Our thoughts and prayers are with the generations of Unser’s who mourn the loss of one of the all-time greats and carry on his family tradition.”

In all, more than a dozen members of the Unser family would work in auto racing, including all three of Unser’s brothers. His older brother Bobby, won the Indianapolis 500 three times, called the 1987 race on TV for a national audience.

Unser won that race competing against his son, Al Unser Jr., who finished fourth that year and would go on to become one of the world’s premier drivers, twice winning the Indianapolis 500. They shared the track several times, and the father assumed the nickname Big Al after his son, nicknamed Little Al, established himself in racing.

At the Beatrice Indy Challenge in 1985, Unser pulled up next to his son toward the end of the race. They briefly looked directly at each other, gave each other a wave, and Unser pulled ahead and won the race.

Unser retired in 1994 and lived in Albuquerque. He is survived by his wife, Susan, and son, Al Unser Jr. Two daughters, Mary and Deborah, died before him.