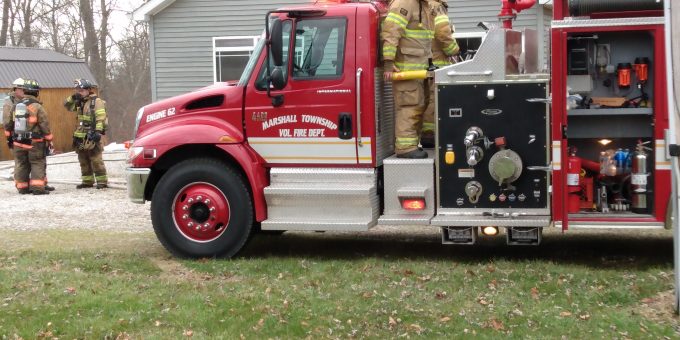 The fire was reported at 1:10 p.m. after the homeowner arrived home and found smoke in the area of a reptile tank that was being heated with a heat lamp.

The home is owned by Zachary and Tasha Morand.

Tasha and their children ages 2, 4, 6, and 7 have gone to Indianapolis today to the Children’s Museum.

When she returned home she found her home full of smoke and called for help.

Zachary who is in the Coast Guard was at work on Crane base. He rushed home after being alerted to the blaze.

The couple does have insurance and had moved into the house in June.

According to Perry VFD Assistant Chief Max Peters, when he arrived on the scene fire was going up the wall around the tank.

Peters, who lives just down the road from the location, drove his personal vehicle to the fire.

He entered the home armed with the family’s garden home and began dousing the blaze and requested Marshall VFD to respond.

“I did what I needed to do,” Peters said. “I could have gone to the department and got a truck, but by the time I got back, we would probably be looking at concrete bricks remaining. When I entered the home the fire was climbing up the wall around the reptile tank.”

Marshall Assistant Chief Josh Morron said the hottest part of the fire was near the furnace and a receptacle area.

Firefighters were able to contain the fire to one room but there was extensive smoke damage throughout the home.