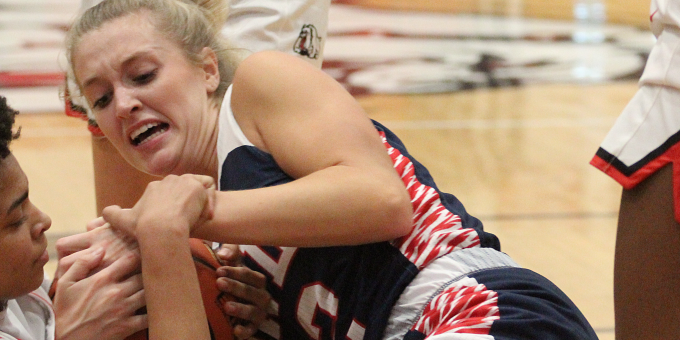 BEDFORD – Enemy territory is the proving ground in the Hoosier Hills Conference. Leave the comfort of home, overcome some hostility, succeed against greater obstacles. So far, Bedford North Lawrence has thrived under the adverse conditions.

The No.4 Stars will face their final league road test on Thursday night when they visit Seymour. It’s also the final leg of a three-game HHC trip that has exposed BNL’s depth of character and resiliency. BNL (8-1 overall, 3-0 atop the conference) has survived the heat of a fierce ranked rival, the flames of a scorching shooter. The Owls (5-3, 0-1) were hot recently until Jennings County doused the fire on Tuesday night. BNL, chasing the coveted league title, doesn’t want those embers to rekindle at its expense.

So far, this triple trial has taken the Stars to Jennings for an impressive 50-34 victory that was dominated by defense, to New Albany for a tougher-than-expected 58-45 victory that featured a tremendous perimeter shooting display by NA’s Maleea Roland (seven treys, 26 points). What surprise awaits now? That’s the deliciousness of HHC journeys. It’s the box of chocolates, never knowing what you’ll get.

“Conference games on the road are tough,” BNL coach Jeff Allen said. “You have to meet the other team’s intensity, you have to fight through their runs. And we’ve done a good job of that. The kids have some resilience to them, which is a really good thing.

“It’s another big conference game, to take us to 4-0. We have to come out with the same intensity we know Seymour will come out with.”

The Owls started with tough losses to ranked opponents, failing to 3A No.8 Salem (70-47) and 3A No.2 Silver Creek (80-50). They ripped off five straight wins after that, then suffered a 70-42 setback to the Panthers in their latest outing. They are paced by sophomore guard Kendall Sterling (15 ppg), 6-0 senior forward Grace Meyer (12.0) and junior guard Brooke Trinkle (12.0).

BNL is allowing only 35.9 points per game and have held five foes under that mark. “It’s about us playing at our level from a defensive standpoint,” Allen said. “It always starts with defense for us, make sure we get off to a good start on the defensive end.”

The Stars will counter with the electric duo of sophomore Chloe Spreen (17.1 points, 5.4 rebounds) and junior Karsyn Norman (14.7 points, 3.1 assists). When BNL has been at its best, a third threat has emerged, but it has changed almost nightly. Last time it was Carlee Kern (11 points at New Albany), before that it was Mallory Pride (14 against Jeffersonville). Madisyn Bailey has been solid on both ends, averaging a team-high 3.9 assists and adding 3 steals.

“It’s a team concept,” Allen said. “We’ve always preached that. If you’re going to take Chloe or Karsyn away, these kids understand they have to step in and take up the slack. Each piece is very important. It makes us more dangerous.

”Chloe gets a lot of attention. She understands that. And if she draws that kind of attention, it creates opportunities for her teammates. We won, and she’s a winner. That’s what she’s all about.”

BNL has won seven straight in the series with the Owls, capped by last year’s 62-37 triumph. Spreen had 20 points, Chloe McKnight totaled 20 (to become the eighth player in program history to reach 1,000 career points), and the Stars forced 27 turnovers. Meyer and Sterling had 10 points each for Seymour.

Last meeting: Last year at BNL, the Stars rolled to a 62-37 victory. Chloe Spreen scored 20 points and Chloe McKnight added 20 (reaching 1,000 points for her career) for BNL. Grace Meyer had 10 points for the Owls, who were guilty of 27 turnovers.

Game notes: BNL has won seven straight in the series. The Stars rank 11th in Class 4A defense, allowing only 35.9 points per game.