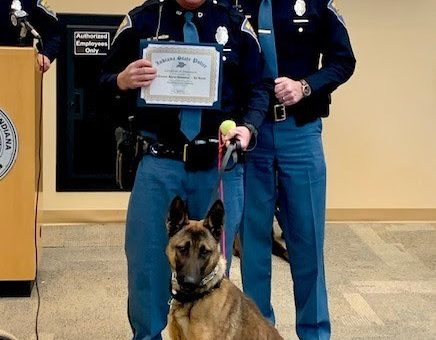 Senior Trooper Geltmaker is a fourteen-year ISP Veteran, and Rando is a 1-year-old German shepherd and Belgian Malinois mix. Both completed 12 weeks of training together, in which they accumulated over 400 hours of training in obedience, narcotics detection, and other K-9 patrol functions. Rando is now certified in the detection of Methamphetamine, Cocaine, Crack, Heroin, and Ecstasy.

Trooper Geltmaker and Rando were one of eleven K-9 teams that completed the training; the other ten teams will work in various districts throughout the state. The Indiana State Police currently has 36 patrol K-9 teams and six explosive detection K-9 Teams. With this addition, the Sellersburg Post now has two K-9 teams, as Trooper Geltmaker and Rando join Senior Trooper Zachary Smith and his partner, Riggs. Trooper Smith and Riggs have been patrolling together for over six years.