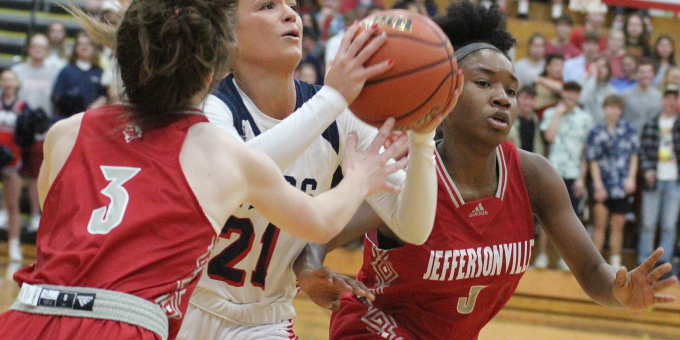 BEDFORD – The bold are brave enough to travel the unknown, and learn what they are capable of accomplishing. Bedford North Lawrence will veer off the well-traveled, familiar path and journey into mysterious territory against a powerful, strange force. How good are the Stars? They are about to find out.

BNL, undefeated and ranked No.3 in the latest Indiana 4A poll, will face Fremd, one of the Class 4A powers in Illinois, in the Sneakers for Santa Shootout at Brownsburg on Saturday night. The event is a one-day, seven-game extravaganza featuring high-level teams from three states. None are more intriguing than this collision of two proud programs.

This is obviously a new BNL opponent and begs a few questions: Where is Fremd? Who is Fremd? And to paraphrase Drax, one of the Guardians of the Galaxy, Why is Fremd?

Where? Fremd is located in Palatine, a suburb of Chicago on the far northwest side, closer to the Wisconsin state line than the Indiana border. Who? The Vikings are the defending 4A Illinois state champions, and they were state runners-up in 2015 and ‘16. Why? They were scheduled to test BNL’s mantra of playing anybody, any time, to toughen the Stars for the postseason.

The Vikings, with size and athletic talent, will certainly do that. Fremd, off to a 3-2 start, will not be at full strength as a key player is still recovering from injury, but the Vikings have the post power – which BNL lacks – and the pedigree to challenge, if not conquer, the Stars. The spotlight will shine bright on this one.

Fremd will be missing 6-2 senior Brianna Wooldridge, a dynamite post presence who is expected to produce 20 points and double-figure rebounds when she comes back next month. What the Vikings have is 6-2 junior Maddy Fay (12 points per game) and 5-11 freshman Ella Todd (12.0) as the current stars of a deep roster.

“Fay is a big, strong, athletic post player,” Fremd coach David Yates said. “She’s a tough kid down low. Todd had multiple college offers before she played a game, she does not play nor act like a freshman. It’s not easy for a freshman to immediately establish dominance. But she’s getting to the point where she will burst out. I see her improving each game.”

The Vikings started their season last week with four games in five days during a holiday tournament. Their last performance was a 47-33 win over Cary-Grove on Wednesday. They’re averaging a modest 49 points per game, due to the adjustment without Wooldridge (and projected sixth man Norah O’Brien, another injury casualty) and the meshing of a new lineup after graduating two key stars from last year’s state champions.

“It’s hard to sit there and see Brianna on the end of the bench, knowing what we would have every night,” Yates said. “But it’s given other kids the opportunity to play. In the long run it will make us better. With the team we have right now, with limited experience, they’re learning quickly.”

Giving up interior size has been, and will continue to be, a BNL issue. Defending the paint and rebounding will be a priority.

“Their size is something that is a concern to us, something we will have to battle constantly,” Allen said. “They try to push the pace a little bit, they try to pressure. They’re fairly big, but I don’t know it will bode well for them to do that to us. We have the guards to handle pressure. I foresee them playing more of a halfcourt game with us and use their size. We’ll try to negate that by getting stops and making it a full court contest.”

For the Stars, who usually battle opponents that are extremely familiar with BNL’s personnel and offensive tactics, this is also a chance to see what works against quality competition. Execution and fundamentals will be stressed.

“It will be a contrast in styles,” Allen said. “I’m sure basketball is played a little differently in that area. So it’s always good to play against someone you’re not familiar with, see how you adjust. I think you learn a lot about yourself that way.

“We have to be solid, help on the bigs, and we have to rebound. That’s always a given with us. But on the offensive end, it’s exciting because a lot of times it’s easier to execute our sets against someone who doesn’t know what we do. You have to make adjustments because of the unknowns.”

Fremd might be a new foe, but reputations travel, and video reveals quality.

“They have two fantastic perimeter kids,” Yates said. “Norman is jet quick and can shoot, and Spreen is a dynamite kid. You can see a lot runs right through them. They will take the big shots, and they are very well coached. They play hard.

“It will be a good challenge for us. This game is not one that really counts, but we get to face a really good team to see where we are. I think it will be good for either team.”

Game notes: Fremd is the defending Class 4A state champion in Illinois. The Vikings also finished as state runners-up in 2015 and 2016. Fremd played a limited 6-week schedule because of virus restrictions last season and finished 10-3.