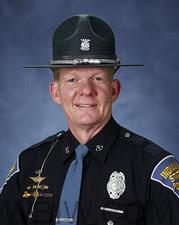 Indiana State Police Bloomington District Commander, Lieutenant Paul Bucher said, “Master Trooper Durnil will be missed by all of us, the Durnil family has been a valuable asset to the State Police for several decades and Todd’s dedication to public safety and the citizens of Indiana is commendable.” Master Trooper Durnil is the son of (Ret) ISP Captain Jimmie & Doretta Durnil and the older brother of (Ret) ISP Sergeant Curt Durnil, who retired in the fall of 2020.

Durnil is an Ellettsville native and graduated from Edgewood High School in 1987. He attended Indiana University while serving in the United States Air Force. He was appointed as a Trooper and assigned to the Seymour District where he patrolled Jackson County upon graduating Recruit School. In 1995 Durnil transferred to the Bloomington District where he primarily patrolled Monroe County. In 2004, Master Trooper Durnil was promoted as a member of the first Indiana State Police Motor Patrol (motorcycle) since the 1940’s. It was during his time on the Motor Patrol that he served as a Squad Leader until 2012. Durnil was responsible for overseeing a group of Troopers tasked with performing extra traffic patrols and ceremonial duties. Durnil has also served on other specialty teams for the department including The Explosive Ordnance Disposal (EOD) Team, the Tactical Intervention Platoon (Riot Squad) Team, and as a Firearms Instructor & Armorer. In 2016 Durnil was promoted to the position of Commercial Vehicle Enforcement Officer and in 2019 he returned to the Bloomington District to complete his career as a road Trooper.

In retirement, Durnil plans to enjoy spending time with his wife, adult children, and extended family. He has also has begun a new career in the local real estate market.