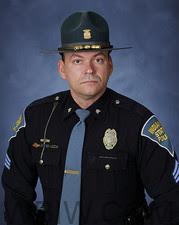 PENDLETON – Indiana State Police Superintendent Douglas G. Carter has announced the promotion of Sergeant Dave Poynter to the rank of First Sergeant. F/Sgt. Poynter will serve as the Assistant District Commander for the Pendleton Post.

F/Sgt. Poynter is a native of Columbus Indiana. He is a 1990 graduate of Columbus East High School. He also graduated from Ball State University in 1994 earning a Bachelor of Science degree with a major in criminal justice along with minors in psychology and sociology.

F/Sgt. Poynter graduated from the 57th Indiana State Police Recruit School in June of 1999. He was assigned to the Fort Wayne Post until 2000 when he transferred to the Pendleton Post. In 2011 he was promoted to the rank of Sergeant and has served as a supervisor until his recent promotion.

F/Sgt. Poynter has been part of the High Performance Vehicle Program which focused on aggressive enforcement of Indiana’s traffic laws. During his time in the program, he utilized a Ford Mustang to patrol highways across Indiana. He is a member of the Tactical Intervention Platoon and he currently serves as the Pendleton District TIP Squad Leader.

F/Sgt. Poynter resides in Madison County with his wife and children.