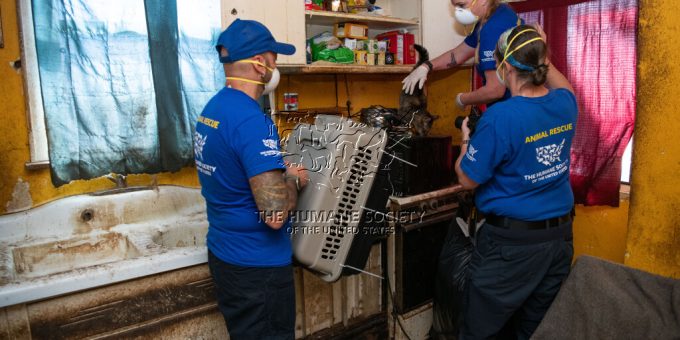 MUNCIE – Thirty cats on Tuesday were in a temporary shelter after being rescued by the Humane Society of the United States and Muncie police. Muncie police served a warrant Tuesday morning at the home. The name of the owner has not been released.

The rescue crews described the find as the worst neglect case they’ve ever seen.

Kitty Block, president, and chief executive officer of the humane society, said, “You’re almost paralyzed when you first walk in; the smell, you can describe it so many times but it really doesn’t come across.”

Block said she was proud to have pulled 30 surviving felines from the home, but she believes there were more cats in the home that did not get rescued.

“It’s really dark in there, and the windows are all drawn, the shades are all drawn, so you’re not even sure you see a cat moving. Sometimes you can’t tell if it’s the filth on the floor or a kitty curled up,” Block said.

Many of the cats were suffering from upper respiratory infections, skin conditions, and other injuries but are all expected to live.

The Humane Society said the property resident surrendered the cats, and they will eventually be available for adoption after their immediate needs are addressed. In the meantime, the organization is taking the rescued animals to a temporary shelter where they will continue to be examined by licensed veterinarians and receive “much-needed care and attention.”

“This was one of the worst animal cases and the most deplorable living conditions I have seen in my 20 years of law enforcement,” said Muncie Police Chief Nathan Sloan.

The property will be condemned after the cats are removed, according to officials.