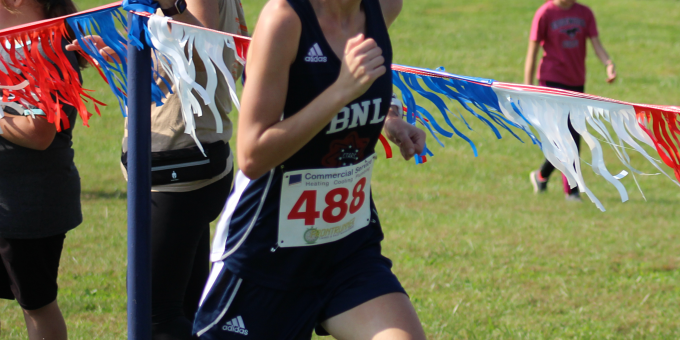 BEDFORD – One of them ran a stunning race, contending with the lead pack for the majority of the 5K duel. The other was just stunned, surprising herself when her name was announced as a qualifier for the next stage of the state tournament series.

Together, Bedford North Lawrence’s Grace Tanksley and Francesca Orozco advanced from the IHSAA sectional on Saturday. They have diffferent styles – Tanksley with her short legs and relentless pursuit, Orozco with her extended stride and freshman naïveté. They ended up going the same place.

Tanksley and Orozco both qualified as individuals for the regional race next week. Tanksley, BNL’s leader all season, was eighth overall in 20:43.86, while Orozco was 39th in 26:17.97. The top 10 runners who are not members of advancing teams earned a ticket to the regional.

The Stars did not make the team cut, finishing sixth with 156 points and missing the required spot among the top five by 3 points.

In the boys race, BNL also finished sixth but qualified three individuals – Jonah Bailey, Cole Baker and Zane Thompson – for the next stage.

Tanksley, a senior who has gone deep in the state tournament every season, was expected to qualify. And she did so with ease. She got within striking range of the leaders, hawking a pack of Bloomington North runners, for the first half of the race, then slowly and begrudgingly gave ground.

“Just to hang on,” Tanksley said of her strategy. “I had a feeling they would end up getting away, but I held on for as long as I could and let them carry me.”

Orozco, making her postseason debut, was battling nerves when the starter’s gun fired. She crossed to claim the final regional ticket.

“I didn’t think I did do well,” she said. ”I didn’t think I would make it. I’m very grateful. I was really nervous. I just concentrated on my stride. People tell me, for having longer legs, I have a small stride when I get tired.”

Bloomington North, ranked No.9 in the final state poll, won from the favored spot in the boys race, totaling 25 points. No.16 Bloomington South was second with 32.

The real battle was for the fifth team spot, and BNL came up short in sixth with 165. Orleans, with two runners in the top 11, grabbed that final position with 136.

“Overall, they gave all they had,” BNL coach Jon Calhoun said. “This is the time of the year. You have to give your all and see what happens. There are no excuses at this point. You show up and put the effort in, do it.”

“Zane really stepped it up, and Jonah has come forward as a team leader now, as a freshman,” Calhoun said. “Cole ran better than he has the last couple of week. He had one of his better races of the season. The time wasn’t there, but the effort and the placing were good.”

BNL will host the regional on Oct. 16. The top five teams and top 10 individuals who are not members of qualifying teams will advance to the semistate at Brown County on Oct. 23.