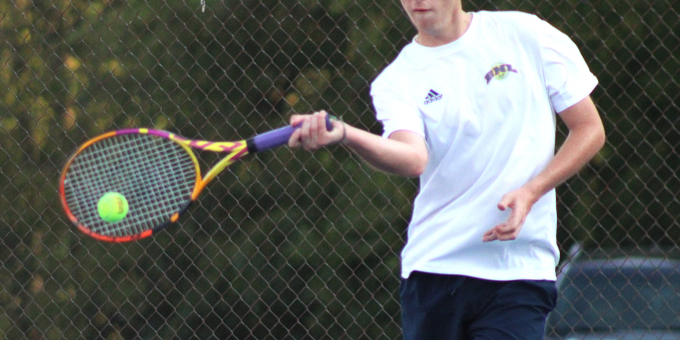 BEDFORD – Forced to shift its lineup just before the state tournament, Bedford North Lawrence debuted its new look with a 3-2 victory over Edgewood in the regular-season finale.

The Stars (9-10) had to scramble when senior Cameron Gratzer was placed in virus contact quarantine. Gratzer’s absence meant two new doubles combinations. BNL made up for that lack of experience with two dominating wins at the top of the singles lineup to vanquish the Mustangs on Tuesday afternoon.

“Tonight was a good test for us, playing with our tournament lineup for the first time,” BNL coach Chris Kurtz said. “With Cameron out, we felt like some adjustments were needed, and at this point in the year it’s just a difficult thing to do.”

BNL posted a win at No.2 doubles with Carter Kimmel and Caleb Jones combining for a 6-0, 6-2 triumph over Andrew Turner and Donnie Chandler. Edgewood won a three-set duel at No.1 (Gratzer’s normal spot) as Dane Weisner and Zeke Weisner clipped Jayden Kemp and Nate Pemberton 5-7, 6-3, 10-8.

“Both doubles teams were new partnerships and at times that was clear, but they’ll get it,” Kurtz said. “In doubles it sometimes takes a bit to connect, so it’s good we got one match with the new duos. We will take some notes from tonight to practice tomorrow, then Thursday it’s go time. They will be ready.”

The Stars had no trouble at the top of the singles chart. Steven Graham blasted Gavin Norris 6-0, 6-0 at No.1, while Graham Turner thumped Quinn Norris 6-1, 6-0 at No.2. Edgewood’s Mitch Deckard stopped Gavin Baker (inserted into singles as Gratzer’s lineup replacement) 6-2, 6-2 at No.3.

“The top two were great again tonight,” Kurtz said. :”They have been bringing it every day, and it is the same solid play, no matter the skill level of the opponent. We’ve been preaching that all season, and I couldn’t be happier with the way they are executing.”

BNL (9-10) will face Bloomington South in IHSAA sectional at Bloomington North on Thursday.