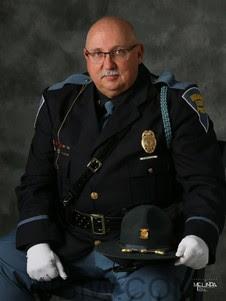 INDIANA – After serving the citizens of the state of Indiana for more than 27 years, Sergeant Dennis Scudder is retiring.

Scudder is a native of Vevay, Indiana, and a third-generation police officer. He is the grandson of former Switzerland County Sheriff Ora Scudder and the son of retired Indiana State Police First Sergeant John Scudder.

Dennis graduated from Switzerland County High School in 1978 and later received a degree in Communications from the University of Indianapolis in 1982. In 1993 he decided to pursue his passion for law enforcement and was selected to attend the 50th Indiana State Police Recruit Academy. Upon graduation from the Academy Scudder was assigned to the Indianapolis District where he would spend his entire career. During his time as a Trooper Scudder has served as a Field Training Officer, a member of the Indiana State Police Honor Guard, a squad leader for Mobile Field Force, certified in photogrammetry, and coordinated the intern program for the Indianapolis District.

Although retiring from the Indiana State Police, Sgt. Scudder will continue his law enforcement service by joining the Marion County Sheriff’s Office. Dennis resides in Shelbyville with his wife Rachel and they have two adult daughters.