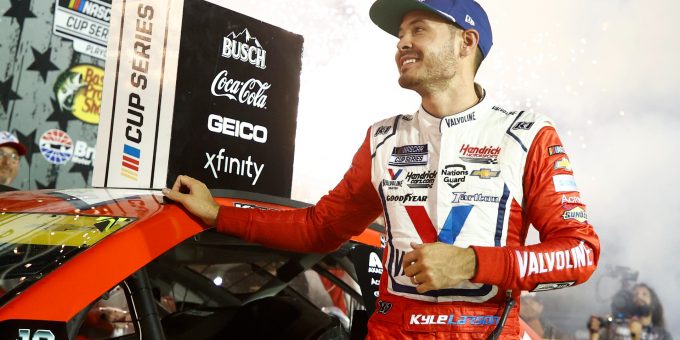 BRISTOL – Kyle Larson won the Bass Pro Shops Night Race to score his 12th career NASCAR Cup Series victory, his series-leading sixth of the season, and his first at Bristol. His margin over second-place Kevin Harvick was .227 of a second.

In the final clash of the NASCAR Cup Series Round of 16, several drivers had flat tires and the leaders made contact as the race neared its conclusion, including some crucial bumping between Chase Elliott and Kevin Harvick, who were battling for the lead with Kyle Larson. Elliott wound up with a flat and Larson, with help from Elliott’s blocking, wound up passing Harvick with three laps remaining to take the checkered flag at Bristol Motor Speedway to win the Bass Pro Shops Night Race.

There were eight caution periods for a total of 71 laps.

Only 19 of the 38 drivers in the Bass Pro Shops Night Race finished on the lead lap.

The Rush Truck Centers/Cummins driver gained three spots on the initial green flag and was sitting 15th when the yellow flag was displayed for the competition caution on lap 40. He asked for a slight air pressure adjustment to help with being loose on entry to the corner. He restarted 15th on lap 49.

Briscoe radioed to the crew on lap 54 that he was too tight following the air pressure adjustments, but he lost only two positions to finish 17th in the first stage.

At the break, he pitted for fresh tires and a chassis adjustment.

Briscoe began the second stage in 17th and was running in the same position when a caution occurred on lap 169. The rookie driver pitted for tires on lap 171 but was happy with the handling of his No. 14 Ford Mustang and asked for no adjustments. He restarted 17th on lap 182.

The Rush Truck Centers/Cummins driver was running 19th when caution was displayed on lap 221 for a multicar accident resulting in a nearly eight-minute red flag delay. Once cars were refired, Briscoe pitted for a chassis adjustment and restarted 24th for the final 17 laps of the stage.

Briscoe advanced to the 20th position by the end of the stage on lap 250.

After staying out during the stage break, the Rush Truck Centers/Cummins team restarted fifth for the final stage. Briscoe made contact with the No. 37 on the lap-260 restart and began to quickly drop back through the field. By lap 273 he was running in the 15th position.

On lap 305, Briscoe reported his Ford Mustang had no drove off the corner. He slipped back to 20th and went down a lap to the leader on lap 360.

Four laps later, the sixth caution of the night occurred with Briscoe being called the Lucky Dog and regaining his spot on the lead lap. He restarted 19th on lap 371.

Briscoe was given one last chance to pit for adjustments under caution on lap 389 after reporting the Rush Truck Centers/Cummins Mustang was tight in the center of the turn. He restarted 15th on lap 397.

The Cup Series rookie drove up to the 11th position on lap 467, but he lost momentum while avoiding a slower car that had made contact with the wall.

Briscoe earned his eighth top-15 of the season in his first career start on the concrete at Bristol.

“I’d say we had a good night overall. We were definitely working in the right direction in terms of adjustments and just doing what we needed to do to get the best finish we could,” Briscoe said. “We had a really good Rush Truck Centers/Cummins Ford, but it would get a little tight later in the long runs, and that would hurt us a little. I’m just glad we were able to stay out of trouble and come out with a good finish.”

Briscoe was the highest finishing NASCAR Cup Series rookie for the 25th time this season.

Playoff Standings to Begin Round of 12:

The next event on the NASCAR Cup Series schedule is the South Point 400 on Sunday, Sept. 26, at Las Vegas Motor Speedway. It is the fourth race of the 10-race playoffs and the first race in the Round of 12. It starts at 7 p.m. EDT with live coverage provided by NBCSN and SiriusXM NASCAR Radio.