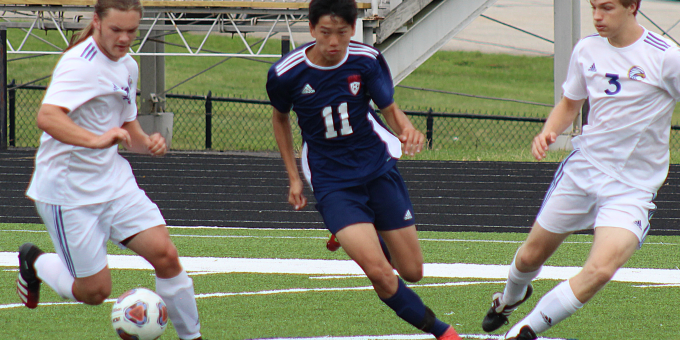 BEDFORD – Some days, that 18-foot wide soccer goal shrinks down to 18 inches.

After converting the equalizer, Bedford North Lawrence had opportunities to produce the go-ahead goal and record the first win on that sparkling turf field. But Evansville Central dodged all the blasts during the final 20 minutes as the Stars settled for a 1-1 deadlock on Saturday afternoon in the second game of a girls-boys doubleheader at Stars Stadium.

Gavin Green’s goal early in the second half helped BNL (3-2-2) salvage a non-loss, although the inability to crack the goal (with top scoring threat Josh Anderson sidelined two more weeks after undergoing surgery on a broken right hand) caused some angst.

“We just couldn’t get one in during the final 20 minutes,” BNL coach Logan Jackson said. “You have to keep your head, not panic, and we got a little frustrated at times. We have to keep working to play the full 80 minutes.”

“I thought we could have played better in the first half,” Jackson said. “It’s not that we weren’t aggressive, but we were going through the motions. We came out strong in the second half.”

Green broke through off a Karter West pass with 36:35 remaining. Despite continued pressure, Evansville Christian goalie Brandon Juarez was able to fend off BNL’s assault.