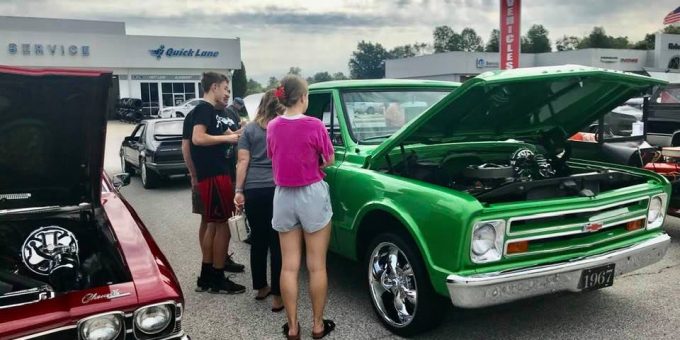 The event is held to raise money for the Lawrence County Patient Services who support local families and their needs who have been diagnosed with cancer.

Each family’s needs could be different and largely depends on the varying circumstances each cancer patient must deal with. Needs supported by the organization could include transportation, cosmetic needs, or nutritional supplements while going through treatment. Lawrence County Patient Services distributes funds based on the needs. The organization is not income-based driven on whether support is given or not.

Many Lawrence County residents have been granted assistance throughout the years, thanks to the generosity and giving of the community.

“This is one of the few fundraisers I really support, my mom passed away with cancer and she went to the Cancer Center here in Bedford. They provided her a wig and helped her with medications,” said Dale Crane who attended Saturday’s event.

It’s safe to say, most families have been impacted in some form or another by cancer. On Saturday, over 200 cars, trucks, and tractors took part of the event. The event was more than a car show, they had visits from the IU Health Lifeline Medical Helicopter, IU Health Ambulance Service. The La -Or-Ma Shrine Club supplied hamburgers, hot dogs, and drinks and their was also a silent auction held to help raise the much needed funds.

General Jonathan George was the keynote speaker during the event on Saturday, telling those in attendance how the Lawrence County community comes together to unite against the great cause of cancer.

“For those who think Americans cannot come together, you have proven them wrong, you have come together for a great cause,” said General George in his opening remarks.

General George was responsible for bringing the B-2 Stealth Bomber during the July 4th, parade in 1995, and then again in the year 2000.

General George shared his experience while he worked for the National Security Office out of the White House. Tours were given after hours and while he engaged with the tourists they would share where they came from. George would proudly share that he was from Bedford, Indiana, “The Stone Capital of the World”. George would continue to explain to the tourists that the three greatest symbols of our nations’s heritage and freedom came from his very own backyard. He further explained, of those three greatest symbols was The Empire State Building, which to him was the greatest symbol that represented if you work hard, you can have a better life for your family. The National Cathedral was the second symbol he noted that demonstrated to him that we believe we are just a small part of something that is greater and the third being the Pentagon (Department of Defense) which represented strength of character and fortitude, along with willingness to stand up in the face of adversity.

“Lawrence County Patient Services program has evolved over the years, with just providing gas cards, and assisting with medications. Over time we have helped clean the patients house, mowed their lawns and we just help with what they need,” said Teena Ligman Patient, coordinator of Lawrence County Patient Services. ” We are there for them, as some may not have family and we try to fill the gaps in whatever they need,” Ligman added.

This year was another successful year for the LCPS and donations are accepted throughout the year for the organization.