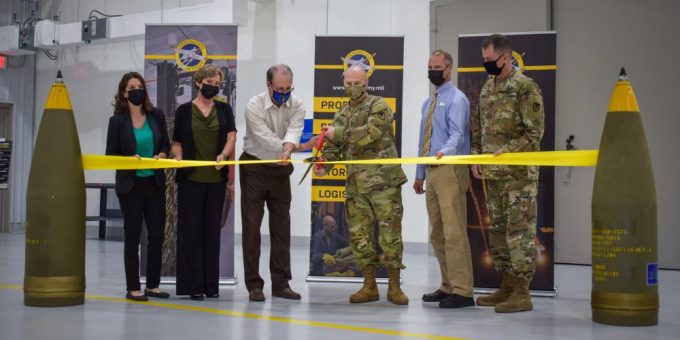 The two military construction projects have been a long time coming for Crane Army, with more than a decade of design, funding, and construction has gone into the process. To have two projects complete at roughly the same time is almost unheard of for Army ammunition depots, making the ribbon-cutting ceremony especially exciting for Army Materiel Command’s overarching modernization strategy.

“This ribbon cutting is about more than just opening another building. It’s about how our Army is undergoing its greatest transformation in more than 40 years,” Gen. Ed Daly, commanding general of U.S. Army Materiel Command, said. “It’s about how we’re executing a 15 year, $16 billion plan to modernize the organic industrial base. It’s about our ability to surge quickly and match the speed of competition, crisis, and conflict. And it’s about ensuring our warfighters have the munitions they need to fight and win.”

“The new plating shop has a production capacity three times the parts per shift of the previous facility, not only improving the rate at which the team can support warfighters but also eliminating the need for a double shift.,” Brig. Gen. Gavin Gardner, commanding general of Joint Munitions Command, said. “It exceeds the industry standard for plating facilities and was designed to be expanded in the future to continue adapting to meet warfighters’ needs.”

The new receiving building is CAAA’s first-of-its-kind centralized facility, used primarily for receiving inbound shipments of ammunition and explosives. The building features in-house bays for inspection and quality assurance along with nearby storage facilities in order to eliminate transporting shipments of munitions to multiple facilities on base – saving Crane Army time and money, while also decreasing risk to the workforce.

“While we’ve spent a few years building shiny, new facilities on the installation, we’ve also worked hard to modernize the ways that we keep our people safe,” Col. Santee Vasquez, commander of Crane Army Ammunition Activity, said. “From implementing robotic lines to upgrading equipment and personal protective equipment, we intend to maintain our workload at Crane Army while also improving the quality of life of our workforce.”

The new facilities will serve as a testament to CAAA’s commitment to modernizing the landscape of munitions readiness across the Organic Industrial Base. These facilities, equipment, processes, and commitments to the safety of the workforce and the surrounding environment will help Crane Army set a standard among ammunition depots on how to effectively provide the highest quality product to the 21st Century force.

Upcoming modernization projects include new facilities for production and storage, upgraded equipment such as road railers, and an overhaul of talent management processes.

What we do here at Crane Army directly impacts the American warfighters and that weight is not lost on us,” Vasquez said. “We are always looking into ways that we can make work safer, more efficient, and more effective so that twenty years down the line, we are still able to provide the best munitions possible at the time they are needed most.”

Crane Army Ammunition Activity produces and provides conventional munitions requirements in support of U.S. Army and Joint Force readiness. It is one of 17 installations of the Joint Munitions Command and one of 23 organic industrial bases under the U.S. Army Materiel Command, which include arsenals, depots, activities, and ammunition plants. Established Oct. 1977, it is located on Naval Support Activity Crane.