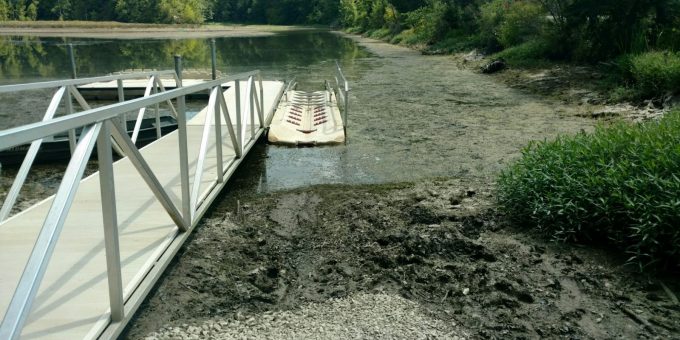 Excavation work has begun at Lower Cascades Park for the Trail Phase 5 and Streambank Stabilization project. Contractors have installed a temporary access culvert for construction equipment and are starting the installation of new storm drain pipes this week.

The road through Lower Cascades Park remains closed to motor vehicles until flood repairs, resurfacing, and the installation of traffic calming measures is complete.  Pedestrians and cyclists using the road are encouraged to use caution in the area.

The parking lots on both the north and south sides of the Lower Cascades Park playground are accessible by vehicle from the north. The Waterfall Shelter remains closed to reservations and nearby sections of the park will be closed for active construction work in the near future.

This project will create a quarter-mile of new 8-foot wide paved trail from the southern end of the Sycamore Shelter parking lot to a new trail roundabout just south of the Waterfall Shelter. From there, an approximately 730′ long accessible boardwalk will be built to a viewing platform at the waterfall, and a new pedestrian bridge will connect the roundabout to the southern parts of the park.

The project will also stabilize approximately 430+ feet of streambank in the vicinity of the Waterfall Shelter by removing parts of the damaged and eroded wall, pulling back the streambank into tiers, and lining them with large limestone blocks. Pulling back the streambank will allow the creek to slow down during high-water events, reducing the erosive forces and decreasing the amount of sediment carried by the water.  Additionally, the project will install new infrastructure for improved lighting through this portion of the park.

An unrelated City of Bloomington utility project at the park’s southern end is substantially complete.

Last week, the Street Division of the Department of Public Works completed improvements to address an increase in parking demand and parking-related challenges on West Illinois Court, adjacent to Crestmont Park playground.

Approximately 21 angle (pull-in) parking spaces were created along portions of the street, including a designated ADA space with an access aisle to an existing sidewalk ramp.  No parking signs were installed at the unstriped areas.

Griffy Lake is currently refilling to a normal level after it was temporarily drawn down to allow for an assessment of the shoreline and lakebed conditions where an accessible pier will be built.  The drawdown reduced the water level by approximately six feet in preparation for a pre-bid meeting held Monday, August 9 at the Griffy Lake boathouse for prospective bidders on the Griffy Lake Accessible Fishing Pier and Loop Trail Project. One of seven Bicentennial Bond projects announced by Mayor John Hamilton in 2018 and approved by the Bloomington City Council, the Griffy Lake project is accepting construction bids through Friday, August 20.

Due to low water levels, boat rental reservations and the launching of private watercraft are suspended through Saturday, August 14, or until the lake returns to an appropriate level. The status of the boat launch can be checked by calling the Griffy Lake boathouse at 812-349-3732. The boathouse is staffed from 8 a.m. until 8 p.m. daily.

The City warns visitors to Griffy Lake to stay out of the lake bed during the drawdown and assumes no responsibility for injuries that occur or items lost to or by individuals venturing onto the lake bed, where there is deep mud beneath the dried surface.

Depending on bids received, a contract for construction of the Griffy Lake project may be reviewed for approval at the September meeting of the Board of Park Commissioners. This project also includes a realignment of the entry drive into the Griffy Lake parking lot and a sidewalk and guardrail along the west side of Headley Road.  The construction documents for this project are posted at https://www.bloomingtonplanroom.com/.